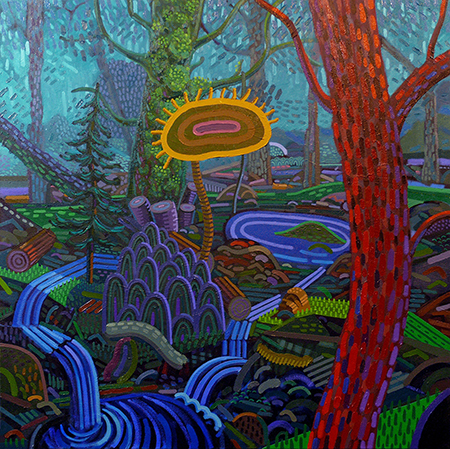 This is an illuminating small survey of recent work on the topic of climate change by one of Seattle’s most remarkable abstract painters. Cable Griffith here focuses mainly on scenes of forests, cityscapes, and increasingly dark and brooding gardens. Nature in peril is a persistent theme at this gallery, and so not surprisingly Griffith’s work complements that of Ryan Molenkamp and Jed Dunkerley. His early work was interpreted as growing out of video game stylizations of cities and woodlands, inviting us into not-so-imaginary worlds of regulated growth, leisure surveillance and genetically mishandled agriculture. Since his 2005 solo debut Griffith has interpreted the steady deterioration of the natural world; his art has been well suited to reflect that increasingly dangerous situation ever since.

However, the case can also be made, as in “Unsettled” and “Brokedown Palace,” that they are also escape hatches away from the dreary reminders of pollution, GMO crops and terrifyingly altered plants in the other paintings. Restricted to two colors each (red and black, gray and white), these works recall Jasper Johns: tight, formalist, ambiguous imagery and enigmatic meaning. They also appear less like children’s board games, let alone video games, then they used to. Griffith’s paintings are good in spite of earlier assignations of technology and meteorological warnings; they display imaginative territories that elude everyday reality. “Aenea” is an all-pink-and-orange pyramidal city in a Martian sunset. “The Approach” and “The Eye” are visually seductive paths for those who wish to immerse themselves in a painterly world of color, earth and complex spatial intersections.