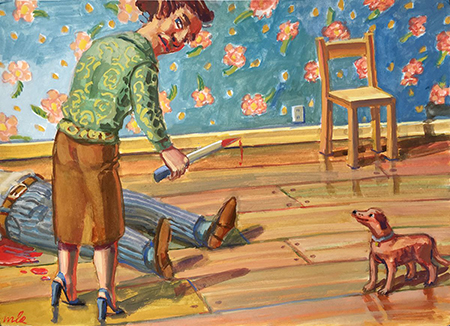 Bay Area artists M. Louise Stanley and Diana Krevsky perform a pro bono publico service with their humorous, trenchant looks at the American scene, Anno domini 2019. Stanley’s nine paintings on paper in “No Laughing Matter” examine contemporary follies and foibles through the lens of art and art history, a product of many trips to European museums and hours spent sketching from the Old Masters. Stanley wreaks gentle feminist vengeance on the abuses of power wrought by the unfair sex. “Bad Girl” depicts a surly, spit-curled temptress nursing a drink and a smoke in a bar, glowering at the disapproving saints set around her in golden rondels. A trio of lawyers, in “Just-Us Served,” take oaths on a stack of legal books, while a statue of Justice lifts her blindfold in alarm. “Suffer the Little Children” depicts the painted sculpture of a priest and two prepubescent boys, as observed by a skeptical tourist. Also included are handmade protest signs (e.g., “Keep Your Laws Off My Body!” with pugnacious fallopian tubes) painted by Stanley & friends.

Krevsky’s ten assemblages and acrylics in “Show and Tell” are bas reliefs on upholstered canvas that likewise turn a gimlet eye on art and politics. “SaraList Painting” is a miniature exhibition of several paintings in a variety of styles, including: a faux framed booklet cover on Walter T. Fosterism, as explained in “How to Paint Red Barns”; a magazine clipping quoting the artist Sara List (“I just let the paint do what it wants to do.”); and a reproduction of a Chronic News review written by one Thomas Alldark. Krevsky mocks art sales infected by show business and marketing strategies in “Pretty as A Picture,” with its scantily clad blonde-bimbo model. Media sensationalism is the target of “Terror and Horror,” with its newspaper front page if-it-bleeds-it-leads headlines juxtaposed with back-page women’s underwear ads. Utopian revolution is not spared, as in “Zapatista Romance,” with its masked couple in profile, a Renaissance cameo via Magritte.