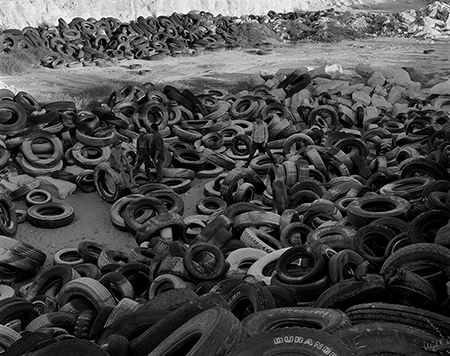 In his archival print, “Coyote,” a polaroid of an open highway is taped atop a creased, weathered paper on which is typed the tale of artist Daniel Ramos’ father’s illegal passage from Mexico into the United States in 1971. Reproductions of such ephemera are combined with the artist’s photographs in a body of work that speaks to his coming of age as the son of immigrants. “The Land of Illustrious Men” is far from a chronological timeline of this family history. The trajectory of Ramos’ recollections feel more fluid, with the placement and juxtaposition of the works speaking as much to his themes as the content of the pieces themselves.

Side-by-side are a self-portrait in the elevator of “Sloan Valve,” where he and his father worked, and an image of Ramos’ Columbia College ID with text that explains his father’s disappointment at Ramos turning his back on a blue-collar life. A trio of images in succession depict a saint pinned to a tree at water’s edge; a nude baby in the arms of his mother; and a boy at rest, partially submerged in a pool of water. Placed as they are next to one another, the photographs converge into the suggestion of a baptism. The underlying themes shot through the show touch on transgression, obligation, identity and the admission into a way of life.

In “The Land Of Illustrious Men” we feel Ramos’ deep reverence for his parents, their journey and their fortitude. Equally as palpable is the deep-seated tension of familial expectation versus self-realization, the inevitable friction between what one wants for oneself and what one’s parents want for you. It’s all about honoring not only where one comes from, but where one wants to go.