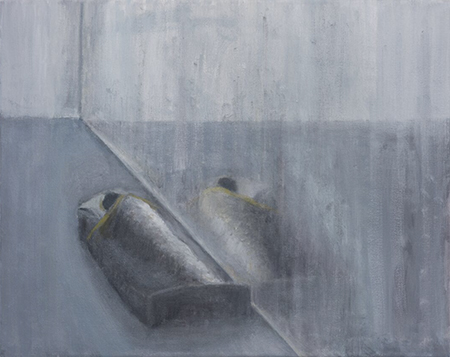 Guillermo Kuitca’s work, as represented here by roughly 20 paintings and another 20 works on paper, is quietly spectacular. Employing a muted color palette with a highly-dulled-to-dark light, the visual pleasures his art provides come via subtleties, demanding patience to fully get a handle on his nuanced sensibility. Well over half the show’s works are titled “The Family Idiot,” after Jean-Paul Sartre’s in-depth investigation of Flaubert. While they can certainly be taken as a response to Sartre, the literary prompt is ultimately not the point: several paintings feature big open rooms with various semi-domestic objects clustered towards the center — beds and other more nebulous pieces of furniture — a trope Kuitca has used for decades. Objects and people gradually emerge through his expressive brushwork, ranging from light to very dark greys with modest passages of color. Fragile tree branches and sleepers in beds are softly reflected in the walls or on floors.

Some of the work comes off as overly proto-European, engaging in Cubist tropes and self-consciously mannered so as to feel too on the mark for a quintessential painter of international biennials; the austerity of Luc Tuymans and the twee-ness of Francis Alÿs come to mind. Kuitca’s reappearance in Los Angeles after nearly two decades (this is his first solo show since 2002 at L.A. Louver) showcases an institutionally secure artist who has steadily exhibited internationally without being seen in L.A. The show’s strongest piece, “Double Eclipse” is, notably, from 2013. It is the apotheosis of Kuitca’s cryptically existential vision; in it, a landscape of furniture both domestic and perhaps commercial spans out at the foot of a black expanse. Objects alternately emerge and fade into the ground’s murky chaos, each groping towards the eclipsed light. It’s a beautiful meditation on attachment, alienation and hoarding. Whether intentional or not, it has that quality of quiet spectacle that here taps into our ever-more-imminent sense of looming apocalypse.