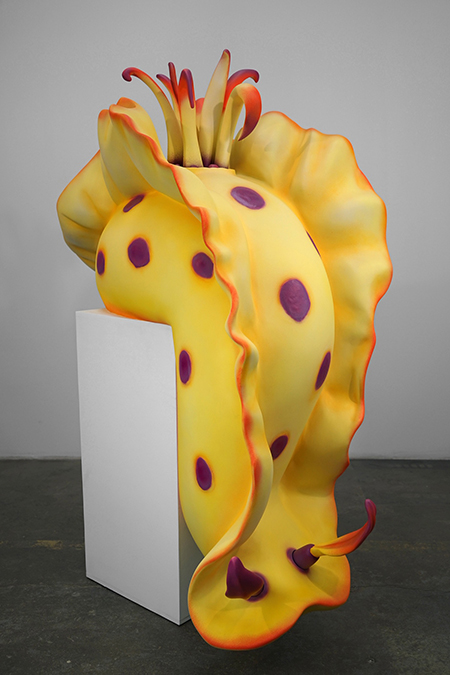 Strange and colorful sea creatures inhabit a gallery rather than the ocean, thanks to Suzette Mouchaty’s fascination with nudibranchs, a type of soft-bodied animal whose sensory organs are located on its head. Nudibranchs are appropriately named, as they breathe through a series of branchlike plumes. Mouchaty’s interest in them dates from her previous career as a biologist. She subsequently chose to pursue an artist practice, recently earning an MFA from the University of Houston.

“Nudies in the Cube” consists of three large, vivid sculptures made from hand-carved Styrofoam coated with acrylic. Their smooth curves, sensuous bodies and sharp color contrasts are characteristic. This series is a reaction to an op ed piece Mouchaty read in the New York Times telling readers not to be concerned about extinction because it is “natural” evolution. Her expertise in evolutionary biology led to the sculptures, which are a departure from earlier work assembled from found objects, as a counterreaction.

“Nudibranch II” has a bright yellow body almost six feet in length dotted with purple spots and orange-tipped plumes. Draped gracefully over a white pedestal, it has two ruffles running the length of its body, which gives it an air of elegance. “Nudibranch III” rests on the floor nearby, its sea-blue body highlighted with yellow along the ridges on its back and the plumes on its head. The third and earliest piece, “Nudibranch I,” stands seven feet tall and confronts us with its anthropomorphic presence. These memorable sculptures hint at the diversity of the more than 3,000 different spcies that comprise the mollusc family. Nudibranchs come in rich colors, fascinating shapes, and intricate patterns. They are in danger of extinction due to the climate extremes threatening ecosystems worldwide. Mouchaty’s work reflects her passion for ecology coupled with a keen knowledge of her subject and an ongoing interest in the environment.