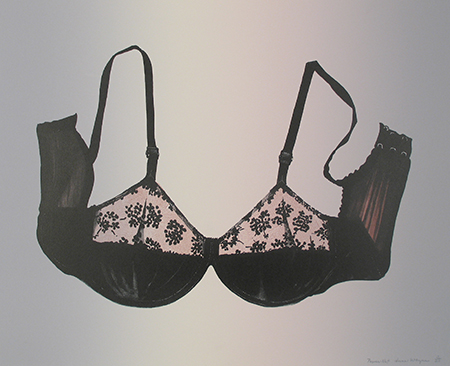 American life has shifted radically since 1960, the year that painter and printmaker June Wayne (1918-2011) launched the workshop that became the Tamarind Institute as a means of elevating fine art lithography during a period when abstract expressionist paintings dominated the art landscape. Women’s rights have expanded, but not without significant setbacks. Scientific knowledge has grown exponentially, despite those who don’t embrace its findings. That’s the context for this exhibition, curated by Brittany Corrales, which focuses primarily on two influences in the artists’ life: her mother and modern science. The exhibition includes 22 of Wayne’s lithographs, including 10 created between 1976 and 1979 as part of “The Dorothy Series,” which incorporates key aspects of her mother’s life.

Using photolithography, the artist incorporated elements such as photographs, newspaper clippings, and government records into these prints, which serve as reflections of not only her mother, but also of Wayne’s early milieu. Then there is the wider context of women in a patriarchal society pushing back against constricted gender expectations. In “Arriving” (1976) a portrait of Dorothy is surrounded by the stars and stripes of the American flag that signals her immigrant roots. Both “The Paris Garter Company” (1977) and “Power Net” (1977) nod to her mother’s occupation as a traveling saleswoman selling garters and corsets, but in difference ways. The latter features the image of a bra, turning the garment into a symbol of female power. “The Dorothy Series” fills three walls inside a small gallery, an intimate viewing environment that heightens the impact of the final print, “Goodbye” (1979). The profile depicts a woman reclining yet holding her head up as she grasps the hand of another woman. The intertwined fingers of each reveal nails painted with a similar coral pink. It is a great example of Wayne’s facility at imbuing prints with emotion.

Five lithographs from “The Stellar Winds Series” convey the artist’s fascination with natural phenomena and cosmic materiality, even as they demonstrate her proficiency with ink blending, which allowed her to convey the essence of energy and light at the heart of the celestial world. Featured works include “Violet Star Dust” (1979), which appears as a central area of dark matter surrounded by violet, as if viewed through an optical device. A richly-textured ovoid, tapered slightly at the bottom, it also echoes the flesh of ripe fruit or engorged female anatomy. Nearby, “Solar Burst” (1982), from “The Solar Flare Series,” features rich yellows and oranges that hint at frenetic activity on the surface of the sun. These selections reflect the cultural optimism then felt in the wake of post-war scientific advances, from genetics to astronomy. The ways scientific discovery has long impacted the tools available to artists and the subjects they choose is an implicit theme that runs through Wayne’s work. The most striking image is “Frozen Title Wave” (1974), in which a flesh-colored wave appears to break over deep waters teeming with ice or coral reefs.

Curator Coralles rounds out the exhibition with lithographs produced at Tamarind by seven of Wayne’s contemporaries, including excellent examples by Matsumi Kanemitsu, “Zen Blue” (1961), and Ed Ruscha, “Excuse Me, I Didn’t Mean to Interrupt” (1975). Collectively they highlight Wayne’s success in fueling a renaissance of fine art lithography. A nearby display case is filled with the tools and materials used to make lithographs. A 2012 video, “The Art of Time,” shows printmakers working at the Tamarind Institute. Its legacy and ongoing impact is the spirit hovering over the entire exhibition. Two text panels elucidate select themes in Wayne’s work, and two others introduce us to the technical basics of lithographic printing and the workshop’s history. Hence, this is an effective but limited introduction to Wayne’s printmaking, its cultural context, and its ongoing influence — even as it frustrates one seeking greater insights into the full breadth and depth of this seminal artist’s body of work. That must be the task of a future exhibition.