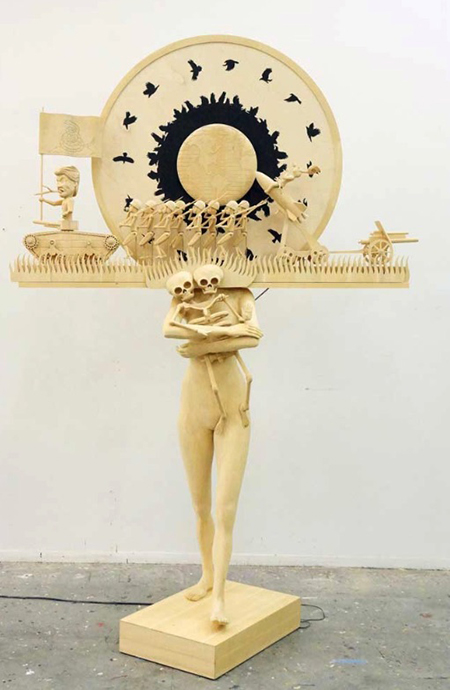 In an oft-quoted 1897 letter to Cunningham Graham, Joseph Conrad wrote of a cruel knitting machine, an extended metaphor that has been variously interpreted as imperialism, capitalism or the universe itself. Conrad says this machine is an accident, born of chaos and indestructible, incapable of conscience or anything but merely knitting and knitting. He concludes his conceit thus: “It has knitted time, space, pain, death, corruption, despair, and all the illusions — and nothing matters. I'll admit, however, that to look at the remorseless process is sometimes amusing.”

To observe Two new such works are the centerpiece of Buck’s solo show of sculpture and woodblock prints. Buck has trod into political territory before, but these are perhaps his most explicitly political works since the Reagan era. With the doomsday clock seconds from midnight, it seems timely.

The larger of the two kinetic sculptures, titled “The March of Folly” is organized as a parade led by Tsar Putin, puffing on a sousaphone and crowned with a miniature St. Basil’s Cathedral. Trailing behind are Trump (babbling atop his tower), a Trojan horse, and Kim Jong Un and Dennis Rodman in a rocket. Scattered below are dozens of femurs. Even the most obnoxious political cartoons are subtler than this.

Yet, atop the Trojan Horse we see the Laocoön group, that most famous study in agony and the futility of defying the gods. At the doomed priest’s outstretched hands is the axis of a spinning triskelion, a symbol of victory and progress rendered quite sardonic by its setting. Buck is not content to suggest that the zero-sum games played by powerful sociopaths are news. Their folly is all too human, ancient, and going nowhere.

Buck handily mixes esoterica, classical art, pop and Biblical imagery in his works. Such images are enmeshed en masse in his monumental woodblock prints, as a background to more benign images of plants and animals. In “The Whip,” for example, one can see a weaponized shipping drone, Mickey Mouse in an open casket, and the cross-bearing Christ being whipped toward Golgotha. (Atop the cross is a dollar sign. Again, not so subtle.) One must examine the prints closely to take it all in. Take just a few steps back and all that is a clear is a thorny, creeping vine with white blooms along its length.

Buck uses over a dozen, saturated colors in many of his prints, giving them big graphic appeal at a glance before we look more closely at the odd worlds hiding within. Even familiar forms become strange by their associations. Some are downright surreal, like “The Fountain,” whose central figure is a vaguely anthropomorphic series of columns and pools that are surrounded by watery images. In the lower left corner, a liquefying skeleton guzzles wastewater while savaging Uncle Sam through a hose emerging from its pelvis.

In spite of the nastiness on display, Buck’s images are not entirely devoid of expressions of hope. The point is not merely to arrive at a simple narrative, or — as Conrad said of the monstrous knitter — to “stand appalled,” or bemused. Folly is primordial, but so are beauty and play, and that is evident.

Still, the prevailing sentiment is apocalyptic. One of Buck’s other formats as a sculptor is to create life-sized human bodies with heads replaced by a novel arrangement of ornate shapes and commonplace objects. They are usually not kinetic, but the second kinetic sculpture, “The other of all Wars,” is indeed in this mode. Mommy dearest holds an infant skeleton with two heads, while her own head is a grim war march. At the front, a fork-tongued Trump is seated in a tank and waving a Gadsden Flag. Behind, gas-masked soldiers march, one riding a rocket á là Slim Pickens classic descent in Stanley Kubrick’s “Dr. Strangelove.” Flames lap back and forth below, with one comb of fire crowning the dual skulls of the infant below. And to the rear, a view of the earth — the Americas at the center, of course — encircled by crows, spinning around it all.

It’s an affecting synthesis of Buck’s modes, less cartoonish than “The March of Folly,” and no mere slight to the blockheaded puppet in the tank. Any puppet would do, for this mother has been with us a long time, from the time of the Fertile Crescent to the New World and back again. Is it dreadful? Oh yes. But, through the melancholy abstraction and solipsism afforded by the luxury of a self-contained gallery space, it is all so darkly amusing.