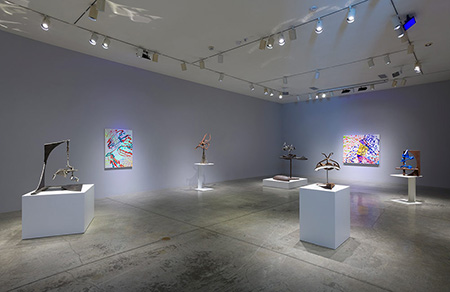 Two questions might understandably pop into a viewer’s mind when reflecting on the title of this exhibition of recent work by Mark di Suvero. The seemingly innocuous title, “Painting and Sculpture,” of Mark di Suvero’s current exhibition kind of threw me at first. The artist is known primarily as a sculptor, so why give “Painting” the lead billing?  The show includes seven small sculptures and five acrylic, metallic and phosphorescent paintings on canvas.

However, those familiar with this vibrant 86-year-old artist and his career may recall Suvero’s description of the cranes he used to weld many of his best known large-scale metal sculptures as “paint brushes.” Via the heraldic sounding title di Suvero points us toward the Abstract Expressionists, with whom he remains strongly associated. These broad media categories are in fact markers of larger than life mythic elements and activities. Many of his large works configure linear steel planks and beams to resemble the pictograms or hieroglyphs of written Chinese characters. Indeed, a dialog among painting, drawing and sculpture has always been key to understanding the artist’s work, and it’s very much accounted for here.

Movement, both literal and implied, has also played a key role in di Suvero’s work. Individual elements in many of these carefully balanced sculptures spin and/or sway when pushed (which the gallery encourages us, carefully, to do). What’s more, each of the show’s five paintings ignite into and then recede from florescent bursts of color created by our spreading a beam of black light on them from an ultraviolet flashlight provided by the gallery. These acts of pushing the sculptures and illuminating the paintings are not merely options for interactivity. Rather they are conceived as gestures the artist requires them to make in order to allow each work to reach its full potential.

The three most geometrical sculptures, “Galactic Compass,” “Hamaric,” and “Blue Flame” reference di Suvero’s Russian Constructivist roots, while two others, “Wishtree” and “Pizzicare,” offer more organic and lyrical features, suggestive of di Suvero’s life-long love of poetry. In “Galactic Compass,” a horizontally positioned stainless steel plank with two rusted steel pieces welded on either end, sits not quite centered on a thin steel spike that functions as the sculpture’s pivot point. Other sculptures also feature pivoting constructions and mechanisms that, when animated all together elicit wonder and delight. In “Wishtree” two rotating cloud- or wave-like forms rotate on top of one another. We can twirl or sway each section in the same or opposite directions simultaneously, or sequentially at varying speeds, thus customizing the work to our personal impulse.

In addition to grafting time as a formal element in this manner, di Suvero’s integration of motion celebrates the archetype of rotation. One thinks of the angular motion of the sun, the moon and the planets, the turning of the seasons, the rhythmic swinging of human limbs, blood and breaths’ circular coursings, the falling and evaporation of rain water. It’s shorthand for the whole whirling blur of all living and inorganic things.

Recalling the crushing and debilitating accident di Suvero suffered while working in 1960, just this past year he had his left leg amputated below the knee. The recovery from the procedure fortunately does not seem to have noticeably reduced the artist’s capacity to move through his paintings, who's nimbly shifting planes and vigorously applied brushwork produce a dynamic collision of colors.

Concurrent with the gallery exhibition, di Suveros’ iconic 60-foot tall outdoor sculpture titled, “Declaration,” lent to the city of L.A. by the artist and supported by the gallery, receives special attention. The sculpture was installed on the Venice Boardwalk in 2001 in honor of the nonprofit Venice Family Clinic. However, by the end of this year the work will be dismantled and relocated to the artist’s studio in Northern California. Peter Goulds, the founder of the gallery, says, “Even though permanent status could not be achieved in its present location, we are honored to have championed this iconic work, a Los Angeles cultural landmark and the focal point of Venice Beach and its Boardwalk.” di Suvero himself adds, “‘Declaration’ has the exact space and openness that I’ve dreamed of — charged by the vastness of the Pacific Ocean and energized by the millions of people that come to visit.”