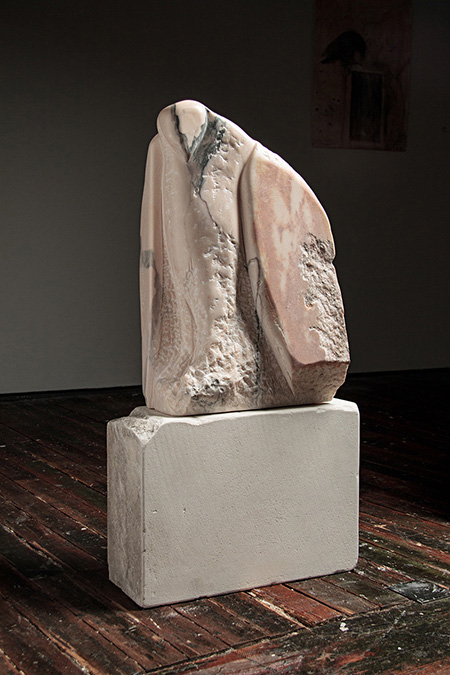 Jane Rosen’s current show is her largest in years. Her career has been bifurcated, half in New York City and half on the West Coast. While she was younger and in New York (she is now 68), her work received lots of attention and was exhibited at important contemporary art centers, galleries and museums, as well as written about in prominent magazines. Once she moved to California to teach at UC Berkeley, her art became more attentive to nature than urbanism.

This grouping of 27 works measures the considerable growth and strength Rosen has experienced since then. Birds of many species, horses and other living things are depicted in watercolor sketches and sculptures of blown glass with limestone, glass and marble bases. Intimacy of scale has always been Rosen’s strength, rewarding concentration and focus on the part of the viewer. In contrast to the frequent gigantism of her erstwhile New York colleagues, Rosen’s approach to scale is like holding a baby bird in your hand: you want to caress and fondle it to protect it from danger.

With plenty of room in this brilliant installation, each piece takes on its own monumentality regardless of size. Seen together, they may allude to Brancusi, Giorgio Morandi, Morris Graves and others, but Rosen’s deep affinity to living things arises from her isolated studio existence in San Gregorio, California, as well as her insistence on reinforcing what Eric Fischl described as her “feeling of the hand.” Two blunt, pink marble carvings stand out: “Horse Drinking Water” (2018) and “Mantle” (2019) hark back to the New Yorker’s reductive, minimalist heritage, bringing closure to the risk of her leaving the Big Apple to seek living, breathing nature. Rosen made the right decision.