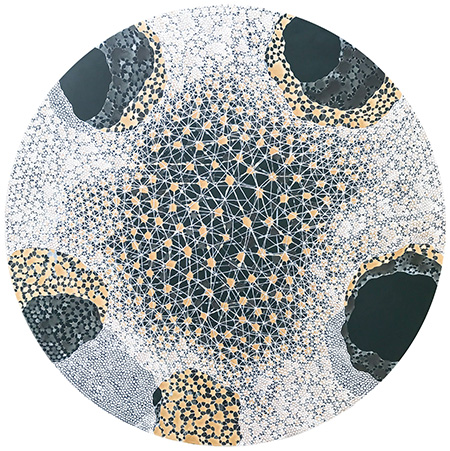 Edgar Alan Poe’s notion that unity of effect is essential to an artwork, and Baudelaire’s concept that art can be ironic, with internal contradictions, lie at opposite poles of aesthetic taste, yet both are always in play. If art is either too simple or too complex, we lose interest; the best art somehow resolves these tensions and synthesizes them into an organic unity. Hadley Radt’s modestly-sized abstractions somehow conjure the mysteries of time and space from economic means — liquid ink and acrylic pen marker on rectangular clayboard or circular wooden panels — and obsessive technique. Micro/macrocosmic structures emerge, unplanned and intuitively. She says, in a video, “I want there to be this tension between kind of a contemplation or meditative quality and then also this anxiety of this accumulation of marks.” And she writes, “I intentionally and unintentionally interrupt the systems I build, causing unexpected glitches that break the pattern … I am exploring terrains of connections; physical, psychological, emotional, neurological.”

Radt’s flatly painted but dimensional geometric/polygonal meshes contrast with the acrylic ink that is permitted to simply obey the laws of fluid mechanics. These dizzyingly complex yet unified “terrain[s] of repetition” have the restricted palettes of scientific diagrams — black, white gray, tan, pale blue. They are tours de force of sustained invention; like Whitman, they are full of contradictions, but large. Don’t miss “Self Limiting Yet Infinitely Variable,” a grid of twenty-five 12-inch diameter tondos, installed five across and five down, with each possessing its own individual character, but happier en famille.