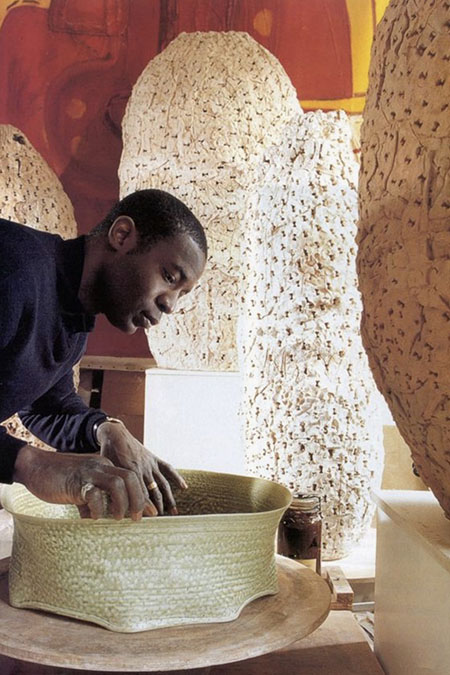 As someone who has juried ten exhibitions in the U.S. and South Korea over a 40-year period, it is important not to be condescending toward artists whose only possible venue is competitive mail-order shows. These number in the hundreds if not thousands around the nation. Geographically disadvantaged, often living in God-forsaken remote areas, they are at the mercy of sometimes unscrupulous organizers who never pay for shipping nor guarantee safe handling — and who generate funds for their institutions through entry fees.

To determine if these juried exhibitions are valid or should be a thing of the past, it is worth examining a number of advantages and disadvantages so today's artists can better decide whether to enter them. For openers, artists of the Midwest are the most vulnerable and most bombarded by such "opportunities." If a known juror is hired, the advantage is to have been in an exhibition selected by — Carter Ratcliff? Janet Koplos? Kiki Smith? Lower-echelon art professors and aspiring artists have to beef up their resumes in order to attain salary advancement or tenure at a university level. They may be trapped in a Midwest college and want out: juried shows are one part of their exit plans. Prize monies can make a difference in an artists' income, but these are often paltry or counter-profitable once shipping, insurance and entry fees are subtracted from the winner's take.

If juried shows are usually a losing economic proposition, in a few instances, depending upon the area or historic prestige of the event, prize money can be considerable. For example, in South Korea's Gyeonggi International Ceramic Biennale, the prizewinners I selected with colleague-jurors from Poland and Norway in 2011 received from $10,000 to $60,000 each. Informed ahead of time, this leaves spending money for everything including a trip to Icheon, the host city. Sometimes the ubiquity of local and national juried shows blinds American artists to such bigger fish to fry abroad. As a result, American accomplishments are under-known and overlooked compared to more globally minded artists from Europe, Asia, Africa and the Middle East.

One artist whom I respect told me his criterion for entering competitions was dependent upon whether he knew at least one juror who was familiar with his work; if not, he would not bother. So big, he held, was the crap shoot. This is not a bad strategy and might be balanced against other questions such as: (1) is the show in a location that a lot of people might be exposed to your work, such as in off-campus or museum settings? When I juried the San Angelo Museum of Fine Arts Ceramics National in 2000 and the Texas Tech University Landmark Gallery annual in 2007, very few people saw the survey in the former case compared to thousands (of mainly students) who saw the latter. (2) Will a publication be involved? Without a small catalogue to document a show, and without being a prizewinner, there is little to recommend mail-order shows in the Midwest, South, provincial Canada, or other regional locations. When the basic money is there for a publication, entrants can count on something tangible beyond the risk of broken work, shipping and entry expenses, and the skimpy reward of another line on one's resume. Without it, you can count on the event being staged as a fundraiser for the host organization. However, if a noteworthy juror also writes the essay (and every juror should be required to hand one in to justify their choices), then the artist at least has a prestigious line for their growing bibliography. As the author of numerous retrospective catalogues and monographs, this, too, can add up and matter in the long run. As such, published records of out-of-the-way shows can be a major reason for entering in the first place, along with reviews, if such things exist in the shrinking print-media coverage realm near the venue. Blog entries count for very little, though they can be consoling and comforting.

Unfortunately in some cases, such as urban community centers, cooperative galleries and politically topical theme shows, the fee for the juror — and the prize money — can be nonexistent or, worse, as I discovered on one occasion reviewing such an exhibition for the Seattle Times. The money for the juror exceeded the tiny prize money! It was a scam designed to funnel money to the juror-crony. Artists are underserved, not to say victimized, by such practices.

You have to be canny and wary of competitive juried mail-order art exhibitions. In towns without art galleries, such practices serve collectors; they also stunt gallery growth and perpetuate backward art cultures. For some artists, the juried exhibition can be a step up, a ticket out of town, or merely a placeholder in a stabilized but boring teaching job.