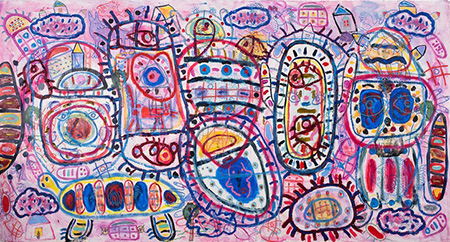 Though not a retrospective, “Past, Present, and Future” by Floyd Newsum includes paintings and drawings from most periods in his 40-year career. More than 30 pieces, several being shown for the first time, trace his evolution from surrealist to expressionist. Through it all his style is consistently bright, playful, purposefully childlike and graphically complex, employing recurring images of dogs, birds, clouds, houses and figures. Hidden among the gestural circles and lines in “Sirigu, Janie’s Journey” is a tiny portrait of Newsum’s great grandmother Janie, who was a freed slave. She appears in several other paintings, along with a homeless man Newsum befriended. One painting devoted to the artist’s dog, “D’Oh Gee at Play Time” depicts the animal playing with other dogs and hanging out in the artist’s yard. Birds, ladders, chickens, and Newsum’s signature tic-tac-toe board are presented in a pastoral setting without a horizon line or traditional perspective. All of the dogs are depicted with both eyes and all four legs, giving these paintings common ground with naïve art, prehistoric cave paintings and Aboriginal art.

D’ Oh Gee is depicted as a blue dog with red spots, red toenails and red circles around his eyes. Newsum’s use of color is bold, impetuous and not restricted to nature’s true colors. The picture plane contains dozens of objects energized by dots and dashes of color, bold outlines, small drawings and elements of collage. “Rooster in a Blue Night” includes a life-sized rooster resting on a ledge in front of the painting. Over time, Newsum has developed a distinctive vocabulary of personal symbols that offers us a direct line into his psyche. Fish, kites and ladders, as well as references to “the next life,” could be interpreted as signifiers of strong religious beliefs. More importantly, this show conveys Newsum’s resilience as an artist, as well as his exuberant attitude toward life and art.