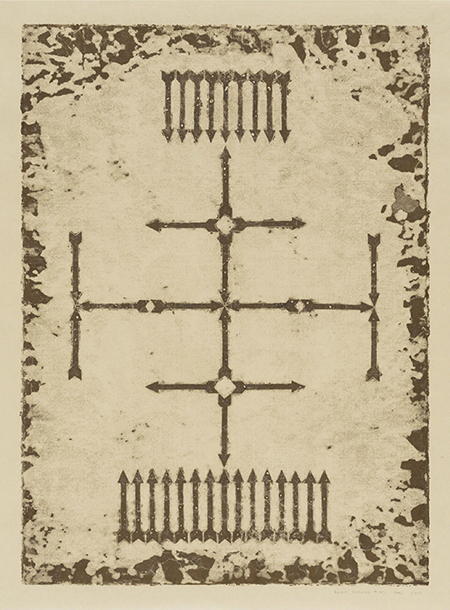 Carried throughout David A. Clark’s work is the motif of the arrow. Representing time, movement, and direction — for Clark, the arrow is an important and universal symbol of humanity. He works with encaustic, a painting medium using pigment with hot wax, on beautiful Japanese paper and calfskin that give the pieces a unique textural quality. Combined with his use of earth tones, the totality conveys an organic and primal quality, like patterns on the wall of a cave. The graphic nature of the arrow produces dynamic and energetic movement and pattern, and being one of the most universal and ancient of symbols, its repetition in the work hints at grander themes. While the arrow could be a seen as a weapon, Clark arranges them into circular, starry patterns that highlight its representation of direction and movement, rather than violence.

The exhibition also introduces Yuri Fukuoka. Her small-scale, porcelain sculptures are so delicate and intricate, viewers will easily mistake them for paper. Petal-thin curls of white and blue porcelain are clustered into flower-like forms. The two artists’ bodies of work share in their use of circular movement, and in their ability to transform inorganic objects into objects that feel natural. The two mediums also work uniquely well together, especially given both artists skill in each. The textural quality of Clark’s encaustic work juxtaposed against the paper smooth yet jagged ceramic pieces of Fukuoka makes for a striking balance of form, material, and energy.