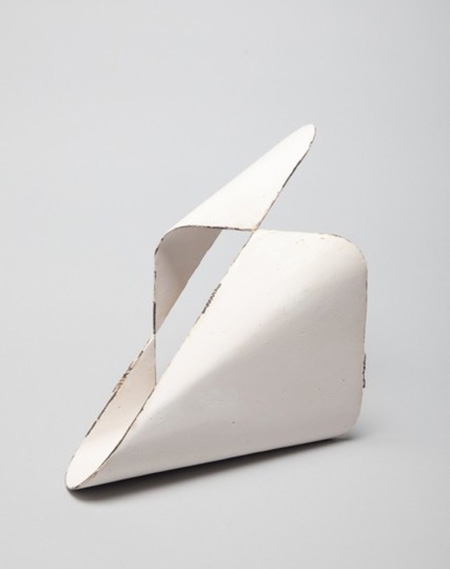 The formalism of yore, once considered mainstream, but now seen by some as woefully out of date, gets refreshed in the sculptures of David Fought in his “Curvilinearity” show, and in the paintings of Steuart Pittman in his “Lake” show.

Fought creates small tabletop-scale sculptures of subtle lyricism and beauty from humble yet demanding materials: unbent and reconfigured wire clothes hangers with plaster. After straightening the wire, the artist heats and bends it into geometric configurations — squares, rectangles, triangles and parallelograms — with slightly rounded corners, twisting the wire loops into shape with the spiral loops used for the clothes hangers. He connects two forms, at angles to one another, and fills in the oddly shaped curved-plane gaps — one thinks of the iridescent planes of free-floating soap bubbles — with thin membranes of plaster. The layers are sanded and burnished smooth. The heated wire reacts with the wet plaster to produce oxidations that read as irregular, painterly lines. The works, with their rounded, looping forms, despite their just-the-facts titles (“Rounded Parallelogram, Rectangle 1”), are little miracles of craftsmanship and poetry, with 2D lines and 3D planes in constant oscillation.

Pittman likewise transcends the dictates of formalism — Minimalism in his case — in small oil/alkyd abstractions inspired by memories of his adolescence by the shores of Lake Michigan. Now an Oaklander, Pittman interprets “moments where we can experience beauty through fleeting encounters at unexpected times and places.” His vocabulary of simple flattened forms, not strictly geometric and just a bit eccentric, are rendered in an unusual palette ranging from the subdued, greyed colors to jazzier primaries more in keeping with California urban street life, think the skateboarding and surfing subcultures. “Freighter” is a stack of almost-rectangles in black, white, orange and gray, set against a pale blue background. The abstraction feels humorous, but also, as anyone living the Bay Area can attest, true to memory. In “Formal” two dark-gray rectangles are displayed one above the other, each with the appearance of an ankle-high shoe form, or a cross-section of crown molding. The similar “Ramp” suggests makeshift skateboard ramps as the true subject. The same playful ambiguity is present in “Vessel,” with its conjoined gray and yellow trapezoids (in this case with a curved base) suggesting the bow of an oncoming ship, simplified by sunlight and shadow. It’s a sophisticated form of reductivism.