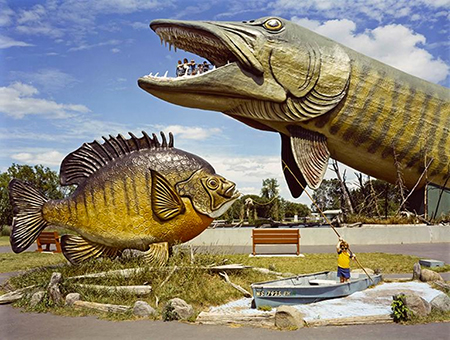 A young boy stands on a boardwalk along the Jersey Shore, grasping the left hand of a man who stands beside him. Photographer David Graham captures the man from the shoulders down, revealing only the boy’s face looking up towards the sky and the figure at his side. Graham’s “Easter Parade, Point Pleasant, NJ” (1993) is one of nearly 70 photographs in “American Stories,” which also includes works by David Hurn and Bill Owens. The image signals a common thread that runs throughout the exhibit: America present is looking up at America past, contemplating all that’s come before, but also looking ahead at what is yet to be.

Rooted in the gaze of these three photographers, the show reflects the everyday experiences of people with relatively comfortable lives, primarily during the last three decades of the 20th century. Graham explores America’s love affair with the open road. Several images feature intriguing roadside signs and monuments tinged with nostalgia. Hurn’s memorable “Tubing, Salt River, Arizona” (1980) hints at connections between people and place. His aerial image of a master-planned community called Sun City highlights the American impulse to create order out of chaos, while bending the natural landscape to his aesthetic will.

Most of Owens’ photographs shown here were taken in 1972, for a series called “Suburbia.” Each comprises a window into the American middle-class, giving us pause to consider the values of that era, particularly the embrace of consumer culture. His gelatin silver prints, most with titles that reference the subjects’ descriptions of the moment or an object of interest, hint at the chasm between generations and expose expectations of immediate gratification. Food, televisions, garages, and green lawns are symbols of success. Collectively these photographers, steeped as they are in wry humor, shed light on American identity, how that identity has shifted over time, and ways it needs to evolve moving forward.