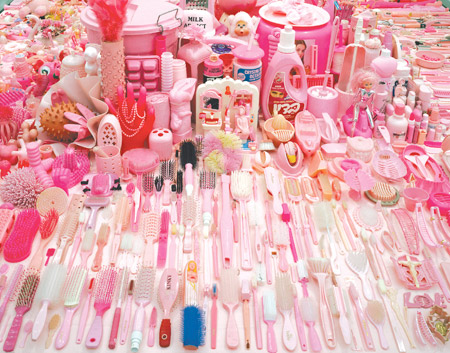 Denver became the official capital city of the Colorado Territory on December 9, 1867, nine years before the state joined the union. The gold-domed state capitol building was completed in 1908 and Denver's Carnegie Library, designed by Albert Ross in a Greek Revival style, was built the following year. It was the first substantial construction in the Frederick Law Olmsted designed Civic Center Park. That first library is now the 28,000 square foot McNichols Building, and sat vacant for decades until it was repurposed as an anchor venue for the inaugural Denver Biennial of the Americas, July 1-31, 2010.

It was the building, and its potential, that attracted curator Paola Santoscoy from Mexico City to take on the task of curating a portion of the Denver Biennial in less than six months. Santoscoy was hired in January and her exhibit was conceptualized and artists contracted within a few short months. "It was not a white cube, but a historic building in the process and stages of renovation. It was a very generous space and provided a good opportunity as a platform to create something in terms of an exhibit project," Santoscoy says. Although Santoscoy goes on to admit that it has been challenging to work within the McNichols building and try to connect her team's exhibit to other elements of the biennial--such as the roundtables, summits and citywide exhibits at 26 different venues--she has embraced all the challenges as part of the framework for the project. Her exhibit's title, "The Nature of Things" is derived from a poem by Lucretius written in the first century B.C. about how humanity perceives the world and continuously attempts to make sense of it through perception. "In our exhibit we are attempting to explain different phenomenon in the world today, current and relevant for different countries in the Americas," Santoscoy says. Inherent to this process of perception is conflict and the convergence of different voices. "The moment the exhibit started to come together is when the artists' voices started entering the scene. Their voices, criticisms, and ideas are what really made the project stronger, what brought it to life," she explains.

Conflict was not part of the original biennial conceptualized by Bruce Mau. Mau's biennial was to have seven themes: health, energy, environment, habitat, economy, education, and technology, run seven weeks, and "inspire people to create a new kind of dialogue and engagement." But after a mutual parting of the ways, Denver Mayor John W. Hickenlooper (who is now running for governor) decided to press on. A new team was put in place and the Biennial reduced to four weeks, condensing to four new themes: innovation, sustainability, community, and the arts. Some of the challenges for Santoscoy result from citywide partners still focusing on the original themes, since they began planning long before Santoscoy came on board.

At the Museum of Contemporary Art Denver, Adam Lerner and Paul Andersen are presenting the first stage of their mutual research project called "Energy Effects: Art and Artifact from the Landscape of Glorious Excess." The premise is that how a country uses their excess energy is what defines its culture. Through the process of developing this idea and seeking out artists, Andersen and Lerner came up with four categories with their own definitions. Scale Energy: what is required to overcome something different in size. Transformative Energy: what is required to change from one state to another. Assembly Energy: what is embodied in the complex accumulation of materials or people. Terminal Energy: what moves a person or object to a threshold. Their exhibit will leave the viewer pondering a question they never thought they'd ask: What do thermal nuclear bombs and knitting have in common? Nineteen artists will attempt to answer that question, and inspire even more.

Local Denver artist Lauri Lynnxe Murphy is working with MCA Denver to present an exhibit in response to "Energy Effects" called "Objectophilia." The second largest exhibit in the Biennial, it will also feature the most local and regional artists, culminating in an exhibition of between 45-48 artists spread over 20,000 square feet in two locations: one at 1490 Delgany and the other at 16th Street Mall and Delgany at the base of the Millennium Bridge. "Objectophilia" is based on the psychic condition where people fall in love with buildings or objects and believe that the love is reciprocal. Internationally recognized artists Sarah Applebaum, Portia Munson and David Buckingham will be featured along with a bevy of local and regional artists.

What promises to be the most controversial event of the biennial is Su Teatro's presentation of "A Strange Democracy" with post-Mexican performance artist Guillermo Gomez-Pena, who leaves no subject unscathed through his nerve-shattering, thought provoking performances. "A Strange Democracy" deals with the end of the Bush era and articulates the formidable challenges facing President Obama. His work "also denounces the anti-immigration hysteria and assaults the demonized construction of the US/Mexican border--a literal and symbolic zone lined with Minutemen, rising nativism, three-ply fences, globalization, and transnational identities."

Tony Ortega is another artist exploring the notion of a porous border in his exhibit at Boulder Museum of Contemporary Art entitled "Mi Frontera Es Su Frontera." Ortega is also creating murals with youth from the "I Have a Dream" Foundation of Boulder and the Family Learning Center. The murals will debut July 2 and remain on display throughout the month at the Boulder Public Library and the Denver Public Library.

Transnational identity as it relates to housing is being explored by four different architecture studios and a design studio participating in "The Nature of Things." Teddy Cruz from Guatemala has been documenting an architectural phenomenon in San Diego, CA where old houses, instead of being torn down, are being moved to Tijuana and repurposed for families. Santoscoy embraced the concept that Mau had when originally conceiving the biennial to have it be not only about visual art, but art in a broader spectrum. The idea of habitat was then latched onto by the Museum of Outdoor Arts. They are showcasing the revolutionary designs of a multi-component, modular, green home prototype called "Element House: Architecture for a New Economy." Also on display is an 18-foot tall bio-dome sculpture created by German atelier Sanfte Strukturen called "Weidenbloom" or "Willow Flower," and three structures constructed by interns under the guidance of architect Doug Eichelberger called "Recycled Dwellings."

There are no borders for sheepherders. The artist collective known as M12 is presenting phase one of "Redisenar los Campitos! (Redesign the Sheep Wagons!)," which features a current day working campito or sheep wagon. The project will circulate throughout Denver, but is scheduled to appear at the City and County Building outside the Ellie Caulkins Opera House.

During the July heat, a visit to some air-conditioned galleries will be a welcome relief. In lower downtown, near MCA Denver, David B. Smith Gallery (who represents Gregory Euclide, one of the artists included in "The Nature of Things") is featuring the hybrid painting of Ricky Allman through July 3, followed by the folk art motifs of AJ Fosik who creates intricately designed wood animal sculptures, and the drawings of Bill McRight opening July 16. At Visions West, glass and metal artist Brian Scott will "Blur the Normal." And Robischon Gallery is featuring a group exhibit in their annex space of photography and video installation artists called "Covering Ground," including Jim Sanborn and Gonzalo Lebrija, who are also featured in "Energy Effects." More photography is on display at Michele Mosko Gallery in the Golden Triangle where the exhibit "The Architect Within" highlights the work of six photographers and painters.

Meanwhile, well-known master photographer Edward Ranney will be featured in an exhibition titled: "Shaped by Culture: New World Landscaped by Edward Ranney," his first at the Denver Art Museum. The exhibit includes 30 black-and-white photographs of archeological landscapes in Central and South America and New Mexico. The images are culled from over 40 years of work by Ranney who strives to show the way Mayan, Incan and Hispanic cultures--and their mainstream counterparts today--see, understand, and venerate their environments. "Rather than exhibit in a separate photo gallery, the works will be installed on the Fourth Floor in our Pre-Columbian and Spanish & Colonial Art Galleries," curator Eric Paddock says. "The photos lend a geographical and physical context to the artworks."

Plus Gallery is the only official partner for the Denver Biennial that shifted their view from the Southern Hemisphere to our neighbors up north. "You are Here" features the work of five contemporary and innovative artists from Canada, the country with whom the US shares the longest undefended border in the world. Brendan Tang, Alex McLeod, Douglas Walker, Andrew Rucklidge and Luke Painter all create work that warps both sense of place and culture. A few blocks away in the RiNo district, RedLine debuts "Artists' Footprints" on July 5, an exhibit where artists will compost, grow, reuse, and gather supplies to reduce their carbon footprint offering alternatives to over-consumption. The show is curated by RedLine artist-in-residence Viviane Le Courtois, who is exhibiting in MCA Denver's "Energy Effects." More cross-pollination happens at Walker Fine Art. "Perceptions: Installations exploring key topics of the Biennial of the Americas," opens July 16 and features installations from Sabin Aell, Kim Ferrer, Emma Hardy and Lauri Lynnxe Murphy. And on South Broadway, Rule, who represents Clark Richert, one of the local artists featured in "The Nature of Things," will gladly share more about the local legend, his Drop City experiment. While there, one can relish the calm beauty of the locally forged bronze works of Yoshitomo Saito.

Denver is a pedestrian-friendly city. Bicycles are available for rent and public transportation makes for easy access to nearly all the biennial venues. Among the events scheduled are seven scheduled roundtables and summits that will be held at the Ellie Caulkins Opera House at the Denver Center for the Performing Arts. Films, lectures and performances will also be hosted in the McNichols Building. Mexican artist Jeronimo Hagerman has created a large, site-specific intervention using plants and vegetation on the exterior of the building, turning the classic columns into palm-like structures. And across the park, from the Greek Amphitheatre to the Denver Art Museum's Gio Ponti building, hangs a netted representation of the tsunami that struck Chile in February. American artist Janet Echelman, using her proprietary software and NOAA mapping, has recreated the resulting tsunami and calls the work "1.26" for the microsecond shortening of the day that resulted from the earthquake's redistribution of the earth's mass. At night a looped program of colored light illuminates the sculpture using colorimeter readings of sunrise-to-sunset in Santiago and Denver.

If you can't get to Denver in July, many of the exhibits will run through the summer and one event is available online. "Curate This!" expanded from a Denver-only venue and went global. As of press time it features 100 artists in 12 venues around the world. And if you haven't seen enough art in Denver during July, then head to Aspen, August 6-8 for their first fine art fair. Billed a mini-Art Basel in the Mountains, ArtAspen will bring 2,000 works of post-war and contemporary art worth more than $2 million to the Roaring Fork Valley.

For a full schedule of events linked to the Biennial of the Americas, visit the event website at: http://www.biennialoftheamericas.org.
For more on ArtAspen visit http://www.art-aspen.com.