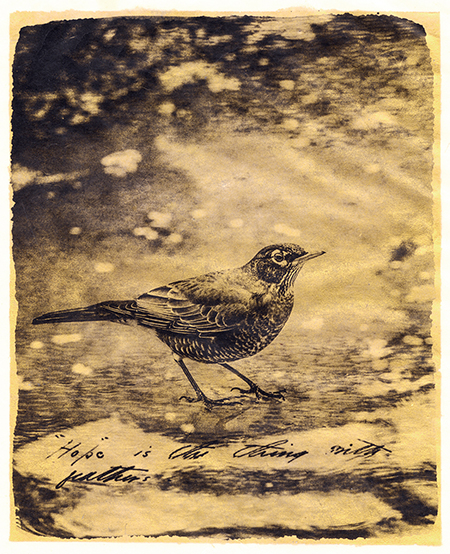 Two generations ago, artists had to be “absolutely modern,” to quote Rimbaud, i.e., abstract, and antithetical to then-despised Victorian realism and sentiment. A generation ago, artists had to be absolutely postmodern: critical (in a rather doctrinaire way) of power structures as expressed in mainstream visual culture. The new ideologies always promise freedom, but it’s always of a prescribed sort unworthy of independent thinkers.

Brigitte Carnochan in her “Emily’s Garden” mixed-media photographs looks back to the poems of Emily Dickinson for inspiration, and to the floral tradition in painting, which began in seventeenth-century Holland — the time of Tulip mania — as a genre that celebrated the beauty of Creation while reminding Catholic and Calvinist viewers alike of their own transience. This feeling for fleeting beauty informed Victorian culture as well, and it pervades Dickinson’s poems, “gardens in which she planted the flowers of her imagination,” which Carnochan (quoted here) has admired since her teens. The reclusive mystery woman of Amherst employed “the language of flowers,” a Victorian association of certain flowers with specific emotions. Carnochan’s twenty-seven photographic homages take their inspiration and titles from specific Dickinson poems. The first lines of these otherwise untitled works are handwritten into the images, conveying both visually and verbally, in the artist’s words, “the poesy of her posies.”

Carnochan’s images are digitally photographed, printed onto negative film, and then exposed on handmade gampi paper, the sepia tint of the platinum-palladium process lending these shadowed, monochrome blooms a nineteenth-century distance. This temporal removal is enhanced by the dark, painterly, irregular edges of the brushed-on emulsion, and the rectangular colored border, which functions like a frame or an etching-plate imprint, made by gold leaf applied to the translucent paper’s obverse. The melancholy lyricism of “The Firmamental Lilac,” “Hope is the Thing with Feathers,” “There’s a Certain Slant of Light,” and “Because I Could not Stop for Death” may be far from brash contemporary sensibilities, but will earn favor in times when our carnivalesque enthusiasms have faded.