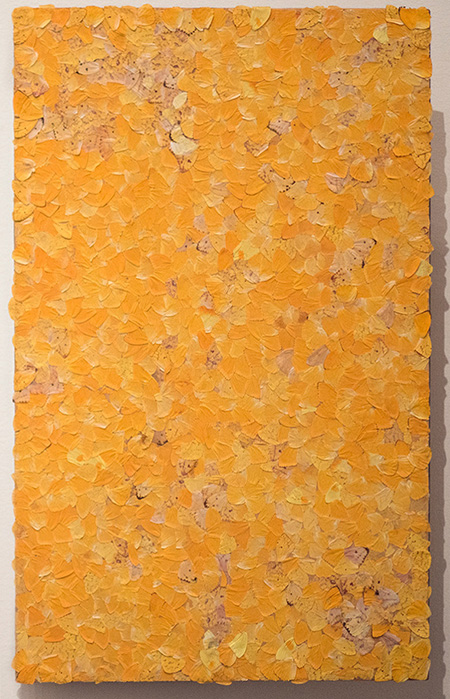 It seems as though blockbuster shows are still the most effective strategy for bringing in visitors and cash, judging from the dozens of pictures of works by Hilma Af Klimt littering Instagram feeds. Still, a high level of name recognition is usually required to get the average art lover to plan a trip to a local institution, let alone to a venue any substantial distance away. Outside of New York or Los Angeles, shows like the DeYoung Museum's current crowd-pleaser "Monet: the Late Years" supply the kind of crowds that can sustain an institution.

With its pleasant, familiar content, this selection of paintings from the artist's last decade is the epitome of a special museum experience in 2019. Tickets for nonmember adults cost $35, so you know it's important even before you queue up through rope lines to enter. The lofty galleries have been painted rich, jewel-like hues: deep blues that complement the four dozen water lily paintings in elaborate frames that punctuate the walls. The pictures have been hung higher than usual — a practice that began in the late '90s, when huge attendance at Impressionist shows inspired the idea to move the art up high enough so that it could still be seen when the gallery was packed with the maximum number of bodies. In addition, the enlarged text of titles and dates has been applied directly to the wall next to each work, making each clearly visible from a healthy distance. Finally, at the exit a substantial gift store offers everything from catalogues and postcards to glass vases and clothing, so that no one need go home empty handed. This is intended to be as essential a part of the visit as seeing the art on display.

I spent about ten minutes in the show. True, I'd seen virtually all of the paintings before, or others a great deal like them, having written scripts for several museum audio tours featuring the artist. Beyond that, however, something about the entire experience seemed so predigested that I just slipped right through it like the proverbial greased pig at a county fair. The recent Magritte show at SFMOMA had some of the same unsettlingly theatrical touches. In that case it was a succession of red velvet floor-to-ceiling curtains that you passed through as you entered, as if you were being prepared for an indescribably fantastic, circus-like spectacle. As you left the show, you could take selfies in a room full of faux-Magritte windows.

Clearly the art alone is not enough, and going to see it has to feel like a trip to Disneyland. Well, so be it; if this is what it takes to keep these places alive, I am on board.

Still, after I fled the all-things-Monet store, I wondered what else there was to see. On the museum's main floor, several permanent collection galleries have been rehung with works drawn from the shared encyclopedic collections of the DeYoung and the Legion of Honor Museums. Five thematic sections are grouped under the apocalyptic title "Specters of Disruption." Each gallery bears it own provocative subheading. "Tremor and Trauma" references earthquakes and homelessness. "From Gold Mining to Data Mining" addresses two kinds of colonialism, the '49ers and all things tech-ish. "The Box Inside Out" invokes the counterculture, and excluded or marginalized artists.

After a deeply enjoyable hour, I was left with an overall impression of mesmerizing curatorial over-reach: five rooms of wonderful art, threaded together by premises that ranged from complex to bizarre. It mostly made me want to figure out what could possibly have been going through someone's mind when the curatorial choices were made. There are a lot of truly great things in this non-show (it's on the museum website as "ongoing"). Described in the wall text as "an inquiry … performed with an eye toward patterns that might suggest a storyline within a collective institutional subconscious," "Specters of Disruption" "connects the museums' colonial and geological underpinnings to the current conditions of the Bay Area."

If the Monet show represents art dumbed-down to a soothing stroll through a theme park, "Specters of Disruption" offers an opposite experience. It's a beautiful mess. Unlike the dreamy uniformity of all those water lilies, these works from radically different times and cultures to invite an understanding of the history of art in a different, much more sociopolitical way. It makes sense that the section about mining would have pictures of prospectors, and even a handsome, powerful sculpture by African American artist Joe Minter made from rusted tools seems plausible. At first, it's hard to understand why an immense, golden work by El Anatsui dominates the room, but when you start considering Nigeria's post-colonial culture and its own history of precious resource extraction, you get it.

Aggressively intellectual, "Specters" requires both engagement and commitment for a full experience of its ideas. The handful of visitors there instead of at "Monet" were engaged just looking at the works of art, all of which reminded me of how many really good things these museums own, both in terms of contemporary masterpieces and the historical backbone of their institutional collections. Many works from the DeYoung's recent acquisition from the Souls Grown Deep Foundation, which documents and promotes the work of contemporary African American artists in the Southeastern U.S., are included.

In the final room — the one that's supposed to be about work that's outside the box — there is an immense, lyrical composition in shades of blue by Abraham Cruzvillegas and the best Jessica Stockholder piece I have ever seen. A brilliant sculpture made from two antique sousaphone bells by the late Terry Adkins hangs on one wall, and a "Concentric Squares" painting by Frank Stella on an another. Framed against Vito Acconci's astonishing multi-panel etching of outspread wings, a Nick Cave figure stands, one foot slightly in front of the other, as if it's looking at the Stella, wondering what makes it "'a reinscription of prevailing power structure." Oh well. Nothing is perfect. I look forward to going back to see these rooms again. Maybe when I have seen it three or four times, I'll understand what those wall texts are trying to tell me. In the meantime, I'm grateful that Impressionism continues to underwrite museum visits like this.