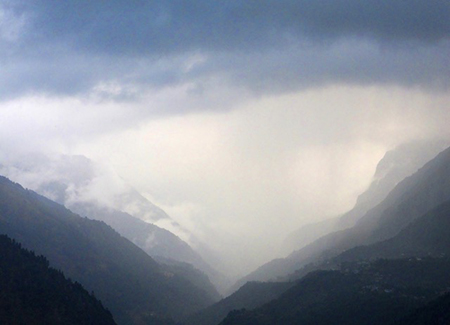 I'm leery of Instagram's pernicious impact on the way we experience art (see my column from last year,). But one thing I'll grant the social media behemoth is this: it's raised laypeople's awareness of the visual realm, democratized the photographic eye, and made us more aware of aesthetic bedrocks like composition, contrast, and color. Folks who once walked blithely past flower gardens and impressive architecture now scan their fields of vision constantly for post-worthy imagery. This is heightened when people travel. The drive to capture the scenery, attractions, cuisine and people of foreign lands and beam it back home, though, has its pitfalls, among them the risk of cultural insensitivity. I thought about this a lot during a recent trekking trip in Nepal. Hiking the Himalayas for the better part of a month offered no shortage of fascinating things to photograph. My quandary was what not to photograph.

My partner and I trekked through remote villages in the Solukhumbu region, where people live much as they did in early agrarian society: plowing wheat terraces with yoked oxen and surviving cruel winters with no electric heat and no running water. We saw villagers wearing colorful traditional garments and women with golden rings through their noses. I would love to have taken pictures of these hardy, hardworking people, but their mores and attitudes toward photography are different from ours, and besides, they were going about their day's work, not performing for our benefit like circus animals. Not all trekkers were as restrained as we were. Many of them shoved their lenses into the faces of Nepalis without a hint of discretion, much less consent. It was cringe-inducing.

I also didn't take pictures of Sherpas hauling supplies up impossibly steep inclines, even though I admired their Herculean strength and adaptation to high elevations. It seemed to me they were doing quite enough as it was without my gawking at them through a viewfinder. I also didn't photograph the staggering mounds of litter we encountered. Nepal has profound waste-disposal issues, since remote villages have no infrastructure. In much of the country there are no cars or trucks, no roads, just footpaths that have been trodden for centuries. Any supplies that come in arrive on the back of mules, oxen, yaks or people. Because the water is polluted, many villagers drink bottled water. Afterwards there's nowhere in particular to put the used plastic bottles. Some people burn them, which releases toxins into the air, but most people leave them on the ground or dump them over a hillside. We saw cliffs strewn all the way down with hundreds of thousands, maybe millions, of discarded bottles and other refuse, cascading in a kind of "trash-fall." It was oddly impressive in a sad, horrific sort of way.

I almost snapped a picture of it for my feed. But what would that have accomplished? I'm no documentarian. I'm not reporting for National Geographic. If I'd posted such an image, people back home would likely have responded patronizingly or with disgust. Ah, the squalor, the pitiable conditions! — or: how slovenly to let that rubbish pile up so! — all the while missing the point that these communities have no choice. Without infrastructure, there's nowhere for the garbage to go. Any solution the residents improvise will be imperfect. I didn't want to casually air such phenomena to judging, underinformed eyes half a world away. (For similar reasons I took no photos of Aboriginal peoples in Australia when I visited in 2016.)

I saw a tourist at a Nepali guesthouse smirkingly snap a picture of the lodge's squat toilet, no doubt to elicit grossed-out guffaws from the gang back in Poughkeepsie or Perth. We heard of mountaineers photographing the frozen-solid bodies of climbers who'd perished on ill-fated ascents, their remains impossible to repatriate. These aren't the kinds of things I personally want to document. I'm no ethicist, and I'm certainly no photographer with a capital "P," but I do have a personal aesthetic, and it's not edgy. My pictures lean toward the picturesque. In another life I might have made a decent nature-calendar photographer à la David Muench. In the Himalayas I racked my focus on natural wonders: Everest, Nuptse, Ama Dablam. Stone dwellings built ages ago, now long-deserted. Scrims of mists enveloping valleys like veils in infinite regress. Somebody with a different sensibility hiking right alongside me would have left Nepal with a travelogue completely different in tone than mine, and that's the way it should be.

In this era when technology has blurred the lines between hobbyists and would-be artists, the lay public is getting a direct taste of what real artists have been doing all along: making decisions based on highly selective and idiosyncratic preferences, crafting a worldview in microcosm, and then — hopefully with empathy, humility, and respect — sending it out to be seen and shared.