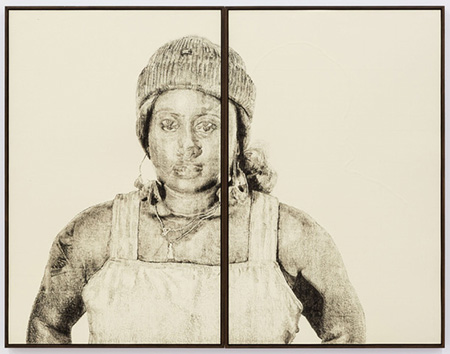 Kenturah Davis’s “Blur in the Interest of Precision” features contemplative portraiture with a complex visual vocabulary. There’s a lot to notice, a lot to take in, depending on your perception. You may notice that the works often come in bisected frames, vertically or horizontally, and twice in quadrants. She uses a subtly applied grid system (the checklist actually specifies this for several works: Oil paint applied with rubber stamp letters and graphite grid on embossed Mohachi paper”), the boxes filled with as little as one rubber-stamped letter, and as many as to accumulate into body parts and faces … into beings. The “Blur” in the show’s title can be seen as the result of the rubber-stamped smudges, in the service of a loose photorealism. There is also often a blurring-through-double-exposure effect employed, with the accumulated letters standing in for photography (or pixilation). Unlike in photography, however, we’re not burdened the way we would be from the association of a simple Photoshopped distortion trick. Indeed, in taking in the show as a whole, the images transcend media niches (drawing vs. painting vs. photography, etc.) and become acts of perception. This may also include taking in the execution of the complex mix of effects — the stamping is abetted by oil-embossed paper, providing contours that raise (both literally and figuratively) their visceral impact significantly.

“All Water Has Perfect Memory…” is a horizontally bisected image in which a woman’s dreadlocks cascade into each other. In the top half she’s looking down upon herself, in the bottom she’s looking away (from herself and the viewer). In “Both,” on the top half, a woman leans back in repose, eyes closed, while in her upside-down reverse, she leans forward, eyes firmly meeting the viewer’s (at least when you flip your head). As described, these may seem no more a modest nudging of bland portrait investigation, but in Davis’ hands (and eyes, and stamps) there’s greater consequence (is portraiture eternal?). It should be added that the wall pieces are accompanied by several small, shrouded black objects on cement pedestals. Called “Vessels,” they turn out to be ceramics bound in silk. These are more interesting conceptually – an allusion to shrouds comes to mind – than in actuality, as they come off as gratuitous filler, possibly even an unnecessary distraction. “Blur in the Interest of Precision” is an elegant conceit to consider sharpness and blurriness colliding, antagonists becoming friends.