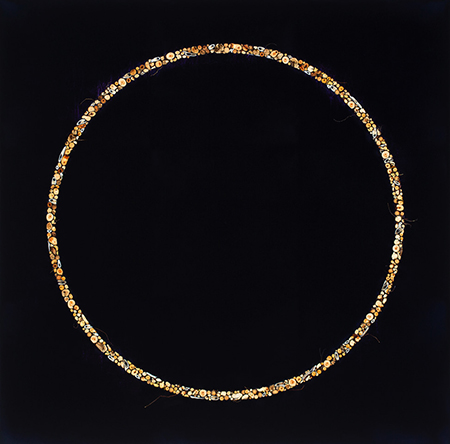 Mayme Kratz favors natural spheres over political corners. Even so, her current exhibition reveals the ways it’s not always possible to separate one from the other. Here, politics intersects with plants and animals encountered during time spent at Bears Ears National Monument. The works set detritus ranging from animal bones to grass seeds within resin, preserving and celebrating these elements drawn from the southwestern landscape even as they issue a compelling clarion call.

President Barack Obama designated the monument, comprising more than one million acres of desert and canyons in southeastern Utah, in 2016. Named for a pair of towering buttes, the land includes about 100,000 ancestral and archeological sites significant in Hopi, Zuni, Navajo and cultures. Kratz’s work draws attention to the region’s beauty, embracing its haunting blend of delicacy and strength.

But it also responds to a shift in public policy, reminding us of the ways human decisions can wreak havoc on the natural world that’s inextricably bound to humanity’s own existence. In a small space, enclosed by three walls at the center of the gallery, Kratz has placed a map of Bears Ears National Monument. It’s been cut with scissors to reflect a 2017 decision by President Donald Trump’s administration, which opened 85% of the land to mining, logging, oil and gas extraction, and other for-profit pursuits.

The map anchors an installation titled “Mapping the Plateau,” with mapping and sound recording assistance from Mark Ryan. Inside the space, gallery-goers hear sound composed and arranged by Serena Fonz. Maps line the interior walls of the space as well, heightening one’s awareness that these bits of natural debris are rooted in a particular place. The installation references the expansive wonder wrought by time spent within nature’s bounty. At the same time, it harkens to the experience of feeling claustrophobic, mirroring the ways the environment is being choked off by apathy, neglect and deliberate destruction.

A small orb of mistletoe encased in resin, just large enough to rest comfortably within two upright palms of Juniper branches, sits atop a white column closeby the installation space. “Juniper Sphere” conjures up a fortune teller’s crystal ball, allowing us to draw our own interpretations. One might see elements of the earth, trapped by small-mindedness or narrow thinking. Or you might see hope for a world in which nature will always find a way to be part of the never-ending circle of life.

Circles are prevalent, as in the particularly exquisite “Circle Dream 75.” Measuring 48” by 48”, the piece forms a meticulous circle out of deer bone and teeth, cottonwood and juniper branches, rabbit brush and snakeweed roots. Each element is distinctive. Collectively, however, they elevate the value of seeking and finding beauty in unexpected encounters. Another resin on panel work, “Vanishing Light 9” features snakeweed from the Colorado Plateau radiating from a small hole at the center of the work. The hole draws us in, like the light at the end of a tunnel or the pupils of a fixed gaze. But it also appears as a small mass of emptiness that could easily expand like a virulent disease to terrifying proportions.

The resin works here possess a range of colors from lavender to fiery orange. Some, such as “Night of Embers,” tend more towards abstraction. Others, including “Ancient Light,” have a landscape quality. Each heightens the sense that serendipity and deliberation are colliding every moment in a complex web of physical, emotional, natural and political spheres.