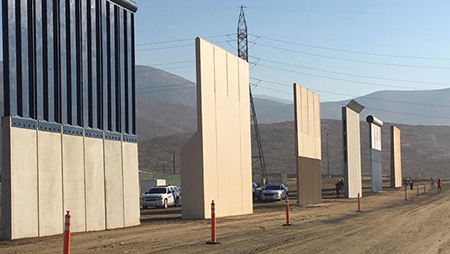 The “big beautiful” border wall that Donald Trump promised his base in 2016 took on new relevance with two recent incidents. The first was the death of a pair young Guatemalan kids while in American custody, an inexcusable tragedy, which conservatives (undoubtedly prompted by stentorian Fox News ventriloquists) were prompt to blame on cruel, careless parents. The second was Trump’s Oval-Office tantrum, when, thwarted by Pelosi’s and Schumer’s refusal to surrender to extortion, he threatened to “gladly” shut down the government.

Thirty-foot-high wall prototypes have been erected in the San Diego area by six companies: W.G. Yates & Sons and Caddell Construction, with two prototypes, each; and ELTA North America, Inc., Texas Sterling Construction, KWR Construction, and Fisher Sand & Gravel. The average cost of each is about $400,000. Hannah Yi, in her January 2018 Quartzy article, “Is Trump’s Border Wall Art?”, outlines the artist Christoph Büchel’s modest and subversive proposal that the wall prototypes as they now stand be accorded the status of art. The art critic Jerry Saltz concurred, and made a strong case, via video, accompanied by Nino-Rota-style music (click the link in Yi’s article) that the monoliths be deemed conceptualist/minimalist art monuments — to America’s shameful flirtation with “hate, xenophobia, [and] racism.” Saltz: “These look exactly like High Minimalism .... rigid, geometric, simplified, primary structures ...“ fabricated in non-art construction materials. He cites the Duchampian theory of readymades as well: artists decide what is art, even if the commercially made objects (urinals, bicycle wheels, shovels, hat racks, bottle racks) they anoint (and in Duchamp’s case, with aesthetic indifference) were never intended as such. “Art’s greatest weapon,” concludes Saltz, ”is paradox.”

The idea is not without justification, in the era of postmodernist relativism, fake news and alternate realities; or rather, in the era of Crazytown, to deploy former Chief of Staff John Kelly’s apropos term. Art has in many respects become, well, anything one wants it to be; the traditional expectations of idealized beauty and self-expression were done away with a century ago and a half-century ago, respectively. Art mavens with a foot in art history, myself included, are sometimes aghast at what passes for art these days, remembering the rule-of-law hedgerow metaphor proposed by Thomas More in Robert Bolt’s “A Man for All Seasons:”

“And when the last law was down, and the Devil turned on you ... where would you hide, Roper, the laws all being flat? This country is planted with laws from coast to coast ... man's laws, not God's, and if you cut them down ... and you're just the man to do it ... do you really think you could stand upright in the winds that would blow then? Yes, I'd give the Devil benefit of law for my own safety's sake.”

Winds of change are necessary, of course, and it’s a fool’s mission to be prescriptive about artistic creativity, as nineteenth- and early twentieth-century audiences were, especially in our volatile, ahistorical, global, digital culture. But perspective is useful in discriminating between the meritorious and the meretricious in the cultural arena, which seems increasingly to reflect the giddy, amnesiac dominant culture of spectacle and money/power. The art historian Wilhelm Worringer wrote, in “Abstraction and Empathy” (1907): "We sense ourselves in the forms of a work of art ... The aesthetic sense is an objectivized sense of the self." So what does that say about our casual culture browsing? The art world largely reflects society’s values; hermit radicals like the outré minimalists and land artists of the 1960s and 70s; the wild-man (and woman!) Abstract Expressionists of the 1940s and 1950s; and even the anti-art Dadaists of the 1920s have all been assimilated and domesticated. Revolt has been institutionalized into style and lifestyle.

But occasionally we see glimmers of reality amid the glitz and gloss. The idea of turning Trump’s Great Wall into a monument to folly, greed and stupidity, a counter memorial to all those Confederate generals on horseback, is appealing in an increasingly diverse nation of immigrants. The comedian Joe Wong recently joked, on Stephen Colbert’s “The Late Show,” “I come from China. I know about walls. They don’t work.” Since everyone — white, black, yellow or red — is really brown, “We’re all pretty much different shades of Mexicans.” Screw the wall; save the prototypes!

By December 18th Trump was arguing that Mexico is already paying for the wall, albeit indirectly; that the US military may end up doing the — ahem — grunt work; and that the “artistically designed” steel-slat style — of KWR Construction — will save billions, although at $486,411, it is the most expensive of the eight proposals. The other steel-steel design, by Caddell, runs only $320,000. Perhaps he mistweeted. Political comedian Anne Coulter does not believe the wall will ever be built; nor does Washington Post columnist never Trumpist Jennifer Rubin, who called it “cockamamie.” At any rate, the government shutdown mantle he proudly claimed to Chuck Schumer and Nancy Pelosi has unsurprisingly slipped from his broad shoulders, eluding his short-fingered grasp.