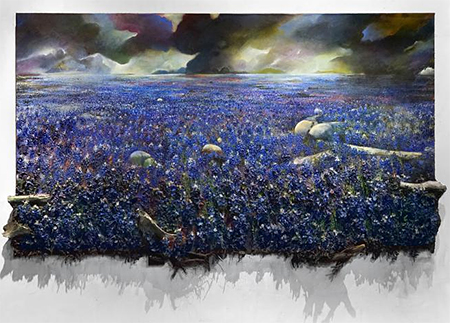 Nearly 60 paintings, drawings, sculptures, and mixed-media works comprise Sharon Kopriva’s “Meditations, Migrations and Muses.” Approximately half are recent, but three decades of her practice is represented. Though extensive, it is not comprehensive, as the majority of the work falls into the three series identified in the title.

“The Muses” include nine tall, narrow portraits of well-known figures executed in oil and pastel applied to photographs. Peggy Guggenheim, Gaia, Alfred Stieglitz, Andy Warhol and Dominique de Menil are among those depicted. At 80 inches high, they dominate the semi-circular inner gallery, looking down on us with somewhat detached expressions. The other muses, called “Tuber Muses,” are three-dimensional sculptures created by building up thick coils of braided hemp and manipulating them to resemble human figures. “Eve Tuber,” for example, is embellished with dried leaves attached to form a skirt. The goddess “Lena Tuber” has more exaggerated breasts and hips. Some of the “Tuber Muses” are suspended, while others are presented on pedestals. Another gallery displays paintings based on Peruvian hairless dogs, a breed Kopriva encountered on a trip to Peru in the early 1980s. She breeds them, and they appear frequently in her work.

Half a dozen large mixed-media landscape paintings, including “Hallowed Grounds,” “Migrations,” “Denton Wetlands” and “Weald,” form a second powerful grouping. At 88, 132, 88 and 148 inches wide respectively, they dominate the gallery’s expansive front room. In “Hallowed Grounds” endless bluebonnets stretch to the far horizon under a dark and stormy sky. The flowers in the middle ground are heavily impastoed, which transform gradually into three-dimensional reliefs in the foreground. The illusion is startling and effective. Likewise, “Weald” (an old English word meaning “forest) depicts a stream in an overgrown wood, with a tangle of painted branches morphing into bas relief elements that extend 10 inches into the gallery space. With its focus on nature and the landscape, is a departure from Kopriva’s ongoing obsession with guilt, death and decay. The pieces here feel visceral and primordial, but sensual and uplifting as well. She conveys the interconnectedness of life on this fragile planet, from the cycles of nature to the mythology and religions that we have created to allay our fears and fuel our dreams.