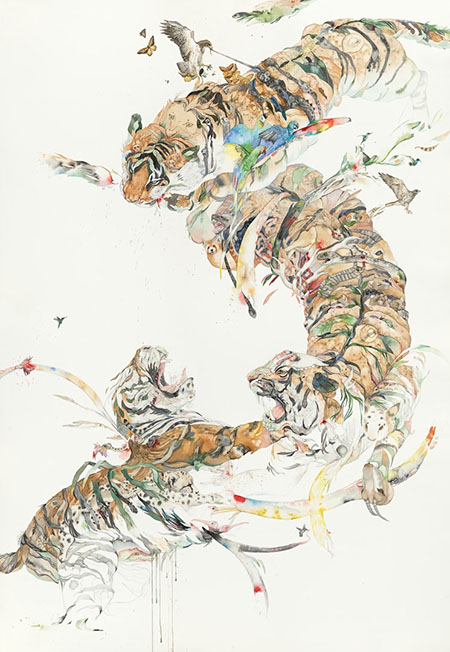 Ancient civilizations tried to make sense of the world around them through mythology. As Laura Ball sees it, mythology still has a purpose if it can help make sense of our subconscious minds. Ball’s flora- and fauna-themed watercolors brim with dreamlike scenes evoking fear and wonder, as well as notions of birth and death, our primal natures and good versus evil. Her menageries of supernatural animals expand on the concept of the chimera, in which parts of various creatures fuse into one powerful being. Especially prominent in a number of works is the tiger — it takes on a menacing, omnipotent form by way of the serpents, birds of prey, small forest creatures, primates and other animals that entwine themselves around its body. The 75-inch-tall watercolor “Tiger Battle” is an engrossing exercise in deciphering all the components, including the faces of wild felines, the parrots, tropical plants and horns, altogether metamorphosing into an S-curve of three fierce and interlocking tigers. Her flawless rendering of both animals and plants evokes archival biological illustrations.

Further exploring mythology and belief systems are works incorporating mandalas, as in the circular pattern of delicate floral varieties interspersed with animal life in “Botanary Mandala.” In addition, “Owl Mandala” plays on the idea of owls as messengers, or even portents of death. A few of the works incorporate spheres of black meant to represent portals into the mind. Given all the references to psychoanalysis, it’s satisfying to learn that Ball wants her work to carry an environmentalist message as well. Many of the animals and plants represented in the scenes are on, or have been proposed for, endangered species lists. “Red Wolf” is a fine example, depicting the wolf surging forward though seemingly in distress. Swirling through its head and body are dozens of partial views of endangered animals, suggesting an effort by the wolf to protect them by embodying them. Monarch butterflies, which are also becoming rarer, if not endangered, fly above the wolf. It’s tempting to apply anthropomorphic qualities of agency and power to Ball’s creatures, but the unseen presence of human encroachment threatens the harmony of the artist’s make-believe world.