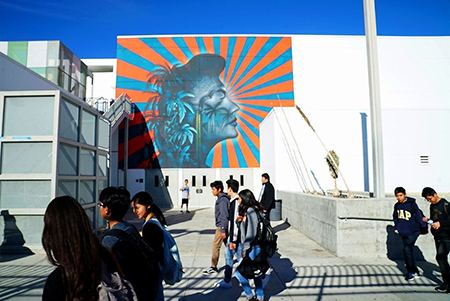 Sometimes it is tempting to sympathize with a cause that is out of line because you empathize with the sentiment. When last month a group of local Korean Americans sought to have a mural located at the Robert F. Kennedy School in Los Angeles by artist Beau Stanton painted out because it reminded them of the wartime Japanese battle flag, it was out of kindness and empathy that the L.A. Unified School District initially agreed. That the artist never had the slightest intention to provoke such an association let alone the Korean American community was not in dispute. Far from being a form of visual hate speech akin to swastikas, the School District focused on mollifying a self-appointed group calling itself the Korean Wilshire Community Coalition.

Fortunately, thanks to the existence of the Visual Artist Rights Act (VARA), which requires notification to the artist and a waiting period of 90 days before a work of public art is altered or destroyed, a month later the initial capitulation was put on hold. The time interval allowed for community members and officials to dialogue with the artist, as well as for the wider community to weigh in.

A letter circulated by a retired district art teacher pointed out that the faculty and students at the school had not been consulted, let alone the community beyond the self appointed coalition. L.A. Times art critic Christopher Knight framed the matter in stark terms in an article headlined "LAUSD caves to claims of racism of a school mural. It's deplorable." Shepard Fairey, who has frequently used a sunburst pattern in his own murals, announced that if Stanton's mural was painted out, he would follow by having his portrait of Robert F. Kennedy at the same campus location painted out as well. Robert F. Kennedy, Jr. and members of the Kennedy family announced their support of Stanton's mural and Fairey's response.

The central question, at least from the perspective of some distance, was whether a minority was indeed being subjected to public insult produced by bigotry, or if this was a case of an over-reaction precipitated either by misplaced sensitivities, a hidden political agenda, or (good grief!) a personal vendetta. I am not expressing a response that is either subtle or that has gone unnoticed by pointing out that the mural lacks either harmful intent or any visual similarity to the Japanese battle flag beyond the basic sunburst element. The colors are wrong, there is no central circle, the radiating lines are off center, their width varies. And there are so many other examples of the basic motif — locally, historically and all over the world. It is banal, at least until we are forced to consider the association by a third, potentially sensitized party. And after careful consideration … sorry, the connection simply does not resonate. The accusation, assuming it has been leveled honestly, does not pass the smell test.

The School District may have initially acted out of an intent to honor local sensibilities, or out of a desire to make an uncomfortable situation disappear. The fact that, as a matter of law, the mural could not simply be made to suddenly disappear allowed for the counter-argument to be made, and a deeper consideration of the issue has resulted in movement towards a better outcome.

Without it, the too-rapid response of L.A. Unified would have resulted in an unjust suppression of artistic expression, with the potential for a larger chilling effect. That an offer was made to pay Stanton to produce a new mural on the same wall would only exacerbate the ethical transgression with what would amount to a polite form of enforcing censorship with what amounts to a bribe.

Because of VARA the process of public dialogue has been allowed to play out. In this case, at this writing, that has resulted in a deeper consideration on the part of government to both sides of a debate involving powerful emotions and nuanced public effects. If my own reading is correct, the mural will remain in place, but the airing of the concerns of at least a segment of the local community will have been heard, digested, and its imprint will resonate. While the trope of these particular radiating sunbursts fails to rise to the level of inherent hate speech, we benefit from not dismissing the feelings of some in the community out of hand. While the School District's initial over-reaction was patronizing and ill informed, the law and the time it required for further reflection prevented School District administrators from damaging the practice of free artistic expression — not to mention their own reputations.

Not everyone gets to go home happy, but the real outcome is the way in which a conclusion is being achieved through the process of civil discourse. It being the holiday season, it's the kind of civics lesson that does more than put a happy face on Santa. It tells us that we have the tools at our disposal to reconcile robust creative expression and public sensitivities when there are clashing interests. Let's carry that lesson forward into 2019.