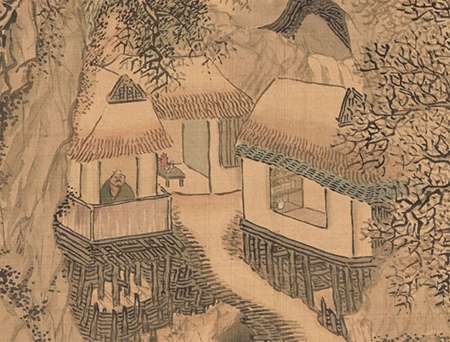 It is, as they say, a splashy opening. A two-story banner announces “Poetic Imagination in Japanese Art,” reproducing an 1855 scroll, “Orchid Pavilion in Blue and Green,” by Yamamoto Baiitsu. Apart from this banner, the only other piece in the cavernous foyer is a humble tokonoma pavilion created by Portland-based wood artist Tom Ross. The contrast between soaring, expansive gesture and empty space sets up the dynamic between form and absence so central to much of Japanese taste. From the entryway, we travel through four main thematic sections, spanning more than 100 artworks from the 8th- through 20th-Centuries, all deftly curated from the holdings of Seattle-based collectors Mary and Cheney Cowles by Maribeth Graybill, the museum’s curator of Asian art. Each of these four groupings probes the relationship between word and image, poetry and gesture, in Japanese calligraphy, landscape painting and ceramics. Arguably, pictographic scripts such as kanji are inherently more expressive than phonetic scripts such as the Latin alphabet we use for English (no doubt Western calligraphers and font designers might beg to differ), lending heightened pictorial/textual potency to the Japanese poems illustrated here.

The first themed section considers the tradition of waka poetry, a form akin to haiku but with a different syllabic structure. Masters of this form — the poets Hitomaro, Ise and Komachi — are portrayed reverently and idiosyncratically in a 1691 triptych by another trio of artist/poets, the father/son/grandson lineage of Mitsuoki, Mitsunari and Mitsutaka Tosa. The piece establishes the importance of family and the generational passing-down of knowledge within East-Asian arts and letters. The second grouping deals with the influence of Zen Buddhism on Japanese calligraphy, contrasting the immaculately regular columns of text in the “Tōdaiji Scriptorium” (744 C.E.) with the looser, more improvisational brushwork of later masters such as Ikkyū Sōjun and Ryōkan.

Next, in a large room painted robin’s-egg blue (a chromatic choice that complements the artworks’ largely subdued palette), a paean to 18th- and 19th-Century literati painting chronicles the milieu of Japanese aesthetes who idolized Chinese courtly mores. Among the strongest works in this gallery and the show as a whole is a six-panel screen, “Old Plum” (circa mid-to-late 17th Century) by Tokuyama Gyokuran, one of the rare female artists to achieve prominence during this era. The painting’s gestural muscularity stands in dramatic relief to Gyokuran’s intricately filigreed handling of the tree’s branches.

In the show’s fourth and final installment, late-19th- and 20th-Century artists during and after the Meiji Restoration struggle to integrate traditional genres and techniques with the Western influences they were increasingly exposed to. Inoue Yūichi’s “Shout” (1961) updates an ancient Buddhist exhortation — cacophonous noises as vehicles to shock students out of complacency — with the unabashed gesturalism of Abstract Expressionism and its Japanese successor, the Gutai movement. An earlier work, “Traveling in the Snow” (circa 1920s) by Hashimoto Kansetsu, renders snowflakes as flung white paint, drawing on time-honored flung-ink techniques that also anticipate the dripped and flung paint of AbEx exemplars Jackson Pollock and Sam Francis.

Across the more than thousand-year range of these works, pictorial relationships between early and modern pieces are enriched by other, more subtextual relationships: between teachers and their disciples, between painters and poets who knew and revered one another, between artists who paid homage to the poets of bygone times. These affinities among the art objects themselves, their histories and contexts, play as a kind of harmony to the formal themes laid out in the exhibition as a whole. They would not be readily apparent to lay viewers were it not for the thoughtful didactic texts accompanying each object. These texts also include accessible translations of the poems inscribed on the screens and scrolls displayed, further turning what might have been an esoteric experience into an emotionally resonant opportunity for viewers unfamiliar with the subject matter.