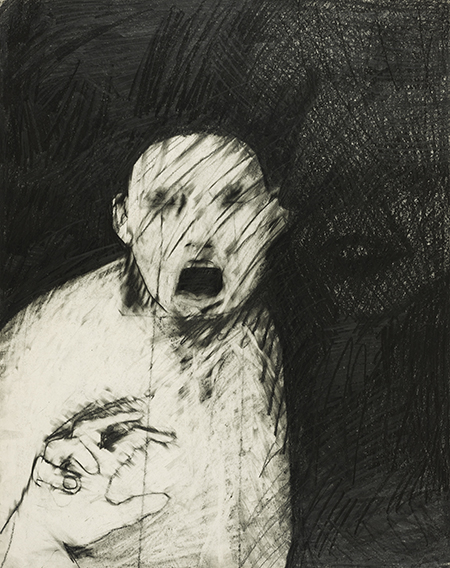 “Rick Bartow: Things You Know But Cannot Explain” is the first comprehensive exhibition of the Oregon native, who is also a member of the Mad River Band Wiyot tribe, indigenous to Humboldt County in Northern California. A startling and magical aura fills the spaces, which concocts a mixed aesthetic blend of a mainstream American sensibility with a shamanistic spirituality reflective of Bartow’s Native American ancestry. With remarkable dexterity and facility, Bartow, a Vietnam War veteran who died at age 70 in 2016, presents a plethora of work in media that include pastel, graphite and ink drawings, acrylic paintings, wood sculptures and assemblages. At once intentionally raw and stylistically naïve, yet at the same time well-schooled, practiced and sophisticated, each work fields and reflects a protean energy in images of hawks, crows, owls, dogs, deer, fish, salmon and other animals.

Barstow’s wildlife often shares compositional space with depictions of human beings, as in “Coyote and Leonardo’s Anatomy 10,” which meshes a coyote and archetypal Renaissance genius in an affecting superimposed embrace. Some of the many wood sculptures in the show present knotty, twisted “limbs” suggestive of found tree branches. They convey an impression of minimal but carefully chosen manipulation. Others stack up into totemic sculptures of animal or bird heads, with each piece showered and accented with a fetishistic bevy of sharp carpenter’s nails.

At times Barstow’s work turns autobiographically and fearlessly inward, as in the show’s title work. A dark and disturbing graphite, gouache and ink on paper drawing depicts a face with its jaw widely agape in an Edward Munch-like scream of existential despair. As a self-portrait it alludes to the artist’s struggles with and recovery from PTSD and alcoholism. Though Barstow left the artistic stage on which he was deservedly emerging too soon, he left behind a significant body of masterful work, to which this exhibition lends testimony.