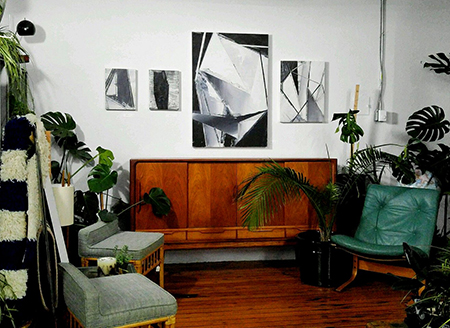 One of the things that makes Portland Portland is the city's proliferation of art venues that aren't primarily art venues. Lots of cities have coffee houses or bookstores with art on the walls, but Portland kicks it into overdrive, not only in sheer quantity, but also in the intangible ethos of a town intent on mashing up art with non-art. This is a city about confluence. It's where the Columbia and Willamette Rivers meet; where hipsters and hippies mingle with yuppies and retirees. It's dead center between the Cascade mountains and the Pacific Ocean, between rock and wave, sitting right above 45 degrees latitude, halfway between the equator and the North Pole. In a town that encompasses, accepts and combines polarities, it's no accident that our art scene is also accommodating and pluralistic. You'll find worthwhile art in the white cubes of our Pearl District, but you'll also find it in the same spaces where you get your bangs cut, where you quaff your microbrews, and where you buy your houseplants — literally.

This phenomenon is always humming in the background in Portland, but it really hit home with me this month when I took an inventory of just how many superb exhibitions are up in nontraditional or mixed-use spaces. At Local Branch a shop that sells houseplants and mid-Century modern furniture, Jason Vance Dickason's sophisticated abstract paintings from 2013 to 2017 are installed amid dining-room tables and chests-of-drawers appointed with a veritable Eden of philodendrons, anthuriums, cacti, and succulents. Avantika Bawa's minimalist architectural studies are on the back wall at Ampersand), a bookstore-cum-gallery on northeast Alberta Street, with rotating exhibitions curated by Myles Haselhorst. At A-List Hair Studio, Dosia Karpinskia has curated a haunting selection of Alexis Mollomo's new narrative paintings, which beckon viewers into a world of symbolic imagery and cloudscapes aglow in eerie, postapocalyptic light. And at Stumptown Coffee Roasters on southeast Belmont Street, Michelle Ramin's luscious, candy-colored oil paintings of Icelandic waterfalls and geysers, curated by Wendy Swartz, harbor darker political subtexts.

These four compelling shows, all by established artists with extensive exhibition histories, fly in the face of the common stigma that showing in multi-use spaces is just a training-wheel, stepping-stone practice round for artists who aren't ready for prime time. Dickason, for example, exhibited at Elizabeth Leach Gallery in January; Bawa, a Ford Family Foundation fellow, currently has a show up at Portland Art Museum; Mollomo, an MFA graduate from U-W Madison, exhibited her harrowing figurative paintings at the now regretably closed Ogle Gallery, which during its 2001-2011 run was among the most engaging art spaces in Portland; and Ramin, an MFA alumna of San Francisco Art Institute, was recently featured in the critically acclaimed "The Office" series at Russo Lee Gallery. Anyone who would suggest that these aren't "real" artists because they're not exhibiting at "real" galleries has a very "real" case of art-world myopia.

If you wanted, you could program a full-day art tour through Portland and never set foot in a traditional gallery. I'm not recommending that — I'm a big fan of our traditional galleries — but it could easily be done. Other stops along the route might include the Basil Hallward Gallery, curated by Tina Merrill, on the top-floor Pearl Room of the world-famous Powell's Bookstore. Within three blocks from one another in the city's industrial southeast neighborhood are Merde and Side Door, restaurant/bars whose walls are adorned by rotating exhibitions, usually tending toward a "Juxtapose"-influenced aesthetic of lowbrow or Outsider art. Scandals, a beloved gay bar downtown, has mounted art shows for years, among them memorable painting exhibitions by internationally shown artist Dan Ness. Photographer Marne Lucas exhibited several bodies of work, including her provocative portraits and self-portraits, at Aalto Lounge on southeast Belmont; Aalto now shows the work of artist Mike Creighton. FalseFront Studio is no mere façade, although it doubles as the living room of gallery director Jason Doize's house; the space has proved a reliable incubator for mid-career as well as emerging artists. Gallery @ The Jupiter is The Jupiter Hotel's lobby, but its monthly rotating shows are consistently noteworthy. And then there is Chicken Coop Contemporary, a "Portlandia"-ready conceit if ever there was one. Established by Srijon Chowdhury and Anna Margaret in their eponymous backyard chicken coop, this too-cool-for-school venue has impressed scenesters and critics alike with its distinctly out-of-the-box programming and even earned a recent grant from the Andy Warhol Foundation, and that's no chicken shit.

Why not, after all? Why be so prickly as to pooh-pooh artwork in proximity to prickly-pear cacti? Why not highlight paintings to salon patrons getting their hair highlighted? One of art's functions is to survive transplantations into multifarious contexts. That's one reason I like catalogues raisonné, artist biographies, and Instagram snapshots that show works in situ. Nothing exists in a vacuum, so why should a sculpture or silkscreen be presented as if floating in an airless void? It's refreshing and democratizing to see artworks inhabiting domestic or commercial contexts. Barring radical changes, which are always possible, dedicated galleries will always have a place near the head of the art world's table. But there are many chairs left for nontraditional spaces. So down with the stigma, the orthodoxy, and the hegemony, I say — bring on the philodendrons!