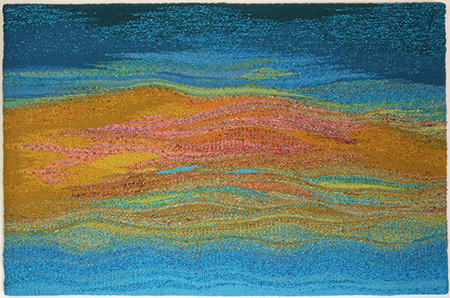 Whether you’re an admirer of textile art in its various permutations or merely curious, “California Fibers” offers 40 works that will engage both mavens and first timers. While media includes weaving, sculpture, quilting, embroidery and crochet, these are not your grandmother’s textiles. The content of many address the travails of contemporary society. A few incorporate discarded plastics as commentary on our throwaway society, while several emphasize innovative methods.

The sub-title, “A Matter of Time,” is elusive. Various artists’ materials refer to the changing seasons, the uniqueness of cultures over time, or engagement with the past in the creative process. Time may be an overarching theme, but it is richer to look at the visual richness and embedded messages of the work. Linda Anderson’s “Unbroken” is a finely woven quilt done in various shades of gray that is rich in figurative details. Central to the piece is a deeply distraught woman, looking out of a window following an explosion. The woman, whose expression is reminiscent of the famous “Migrant Mother” photograph by Dorothea Lange, conveys a world of unexpected and horrific occurrences.

Polly Jacobs Giacchina’s several works include various discarded metals. “Strained” is both a play on words, presumably referring to life today, and a description of materials in the piece, which includes surprisingly harmonious and attractive strainers contained within a large swath of mesh. Julie Kornblum’s woven tapestry, titled “Gyre,” also contains colorful discarded materials, including plastic, yarn and thread, that are brought together in a symmetrical construction that is pleasing to the eye, while referencing the enormous pyres of trash besmirching our oceans.

The contrasting assemblage boxes, “Memory” and “Trinket” by Brecia Kralovic-Logan, include bits of silk, copper, wool, fabric and leather. These abstract works, evoking dreams and memories, reference Joseph Cornell’s assemblage boxes with their surreal aspects. Also invoking memory are several intricate tapestry rugs by Michael Rohde. The artist explains that his rug, “Danse,” reflects aspects of classical music. The image contains spatial difference in each square within the piece. Two works, “Interrogative” and “Explanatory,” each contain numerous abstractly designed squares that the artist regards as aspects of ancient languages.

Perhaps the most profound works here are four large tapestries by Kathy Nida. Her “Heart Shaped Box” features three semi-nude androgynous characters enacting rage, frustration and despair. “I Can’t Be Your Superwoman” incorporates within the body of its female subject babies, children, pets, a tree, a bird, food cooking and a stove. “Holding It All In” also depicts a woman, here packing a plethora of flora and fauna to adorn her body, suggestive of a penchant to hold in her emotions. “All Stacked Up” similarly features a woman with various people, animals and designs emblazoned on her body. Nida’s tapestries summarize the struggles that women face today.

A counterpoint to the rhetorical tone is “The Tribe” by Peggy Wiedeman, a small 11-part sculptural piece set on a shelf. Each colorful basket-like object, made with rag, linen, metal and wheels, takes on a human aspect, albeit like members of a primitive society who are dancing joyously. The total effect is both humorous and exotic. All of the artists in this exhibition are members of the Southern California-based association known as California Fibers.