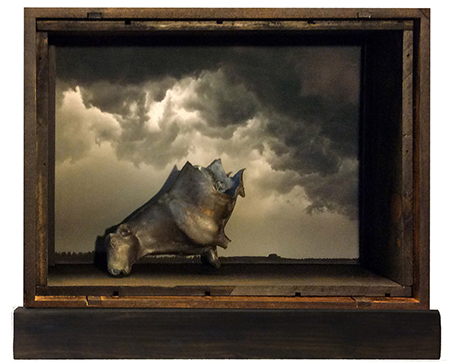 Ward Sanders makes intricate, superbly crafted box constructions that are both ominous and mysterious. These boxes are from a larger series of ”Nightboxes,” whose subjects allude to death, sorrow, fear, extinction, grief and other grim subjects. According to the artist, the series was inspired by Theodore Gericault’s iconic painting, “The Raft of the Medusa.“ The 19th-century French painter’s masterpiece depicts the aftermath of the sinking of the French naval ship, the Medusa. Of the 147 people who initially survived, only 15 souls were rescued. Hunger and thirst led to cannibalism and madness, and the moment Gericault depicts is the sighting of a ship on the horizon that would eventually rescue the remaining survivors.

“Little Egypte” begins with the usual pre-existing box. Sanders creates multiple compartments to hold found objects he collects and sometimes manipulates. In this instance, he has divided the interior into six sections and decorated the inside lid as well. The unifying element is an antique map of Rome, which provides a vexing contrast to the title of the piece. Several sections hold yellowing dice, while others contain parts of the snout of a lizard or similar reptile. Sanders holds a degree in biology and has studied fossils and paleontology extensively, so he sometimes includes skeletal or dried remains in his work. The inside lid is layered with fragments of the same map, a handwritten note and a vintage photograph depicting two figures operating a pulley over a well.

For “The Origin of Blindness,” Sanders created a photo collage using several antiquated wedding photographs. The result depicts three brides, three grooms and more than two dozen attendants, all with their eyes scratched out, essentially rendering them blind. Whether this comments on the state of marriage or is simply enigmatic in order to allow us to provide our own narrative, Sanders transforms the detritus of life, obscuring previous connotations in favor of a new reality. He has talked about his attraction to “relatively worthless found objects” waiting for him to reveal “their intrinsic and hidden beauty,” and they inspire the imaginative storyteller in him.