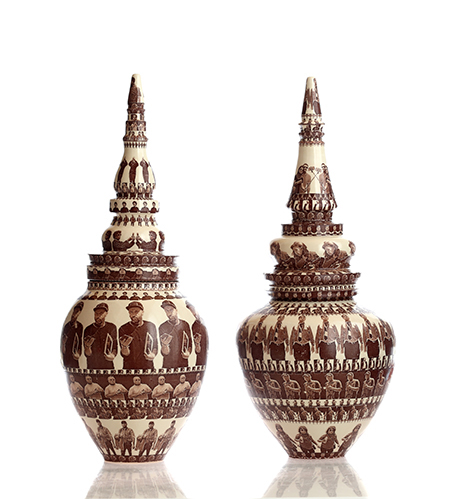 Glass artist Etsuko Ichikawa’s works are serene and ethereal, while mixed media artist Peter Olson’s works are brash and topical. Even so, their concurrent solo exhibitions, divergent as they are, work well side-by-side because both artists are alchemists of a sort. The Seattle-based Ichikawa employs water, fire, paper and — remarkably — uranium, transforming those elements into glass figurines and orbs as well as watercolor paintings. The Philadelphia-based Olson is a hybrid of street photographer and ceramist who transforms his vessels, bowls and plates by adding a photographic myriad of people and places circling around the pieces like a kaleidoscope.

Having formerly worked in the studios of Dale Chihuly, Ichikawa more than knows her way around glass blowing. She plies those skills to blend pyrography into her watercolor works on paper, seven of which are on view as part of her “Vitrified” series. A short video sheds light on her process: Wielding a long blow pipe with a fiery tip, she swirls it close to the paper on the floor in front of her, letting the scorch marks help dictate the composition’s flow. She likens this form of pyrography to letting honey drip into a cup of tea. Later the paper, often with burnt edges intact, becomes the surface for abstracted watercolors. The minimalist brushstrokes both mimic and act as counterpoints to the swirls created by fire, and splotches and drips are left in the composition. The “Vitrified” series is consistent in using green, blue and purple as its colors, which add to the delicate and calming aesthetic. A dancing figure can be inferred in “Vitrified 2218”, and the appearance of a figure is even more subtle in “Vitrified 1218.” One of the most fascinating watercolors is “Vitrified 3118,” with the suggestion of a tumbling blue figure and the thinnest of burn lines stretching across it.

Ichikawa’s work takes on a certain tension, though, with the uranium-related pieces. One is a foot-high vitrified figurine based on ancient Japanese Jōmon pottery, but made with uranium glass. With its bluish-green cast, the armored female figure looks fairly benign in daylight, but it glows in the dark. On a nearby pedestal are several fist-sized orbs derived from hot-formed glass infused with pigment and uranium. One needn’t fear peering into the orbs with the provided blacklight flashlight to admire how they resemble planets — uranium is safe in this form. The seven-minute video “Vitrified” is another aspect of Ichikawa’s versatility. In it, the artist is disguised in a hazmat suit and wanders a forest to discover one of her glass orbs nestled in an ancient tree. As a voiceover plays poetic lines about nature, she cradles the orb and takes it to the sea, where she is seemingly overtaken by the tide. One possible takeaway of the video is the legacy of uranium, with its long half-life, and what it means for future generations. As a native of Japan, the legacy of the 2011 Fukushima nuclear disaster weighs heavily on the artist’s mind.

In “Photo Ceramica,” Olson’s methods of transforming diverse materials are readily understood. He is a longtime street photographer who captures modern life and its familiar scenes, namely, people interacting through smiles, shouts and snubs, along with human accoutrements of cellphones and sunglasses. In fact, “Sunglasses and Cellphones” is a wonderful example of Olson’s process, consisting of a pair of wheel-thrown ceramic urns and vases. The symmetrical perfection of the vessels is itself worth noting. Then he prints his black-and-white images — in this case, people wearing sunglasses and holding cellphones, caught in candid poses and expressions — into postage-stamp sizes and smaller. They are applied to the vessels as if part of a film reel or a strip of repeating decals. Strips of various heights encircle the vessels from bottom to top, even continuing in minuscule fashion inside the lips and lids of the vessels. Through the firing process, the iron oxide in the photos lends an antiquing effect. Olson’s photographic practice also includes capturing museum artifacts, religious iconography and classical portraiture. It’s exemplified in a series of bowls called “All Saints,” in which the images form concentric circles. Admiring Olson’s meticulous work is like looking into a kaleidoscope, with its density of patterns and sequences. Like Ichikawa, Olson draws us into the originality of an artist’s process. It’s their unique mixture of steps toward a finished product that leaves us in awe.