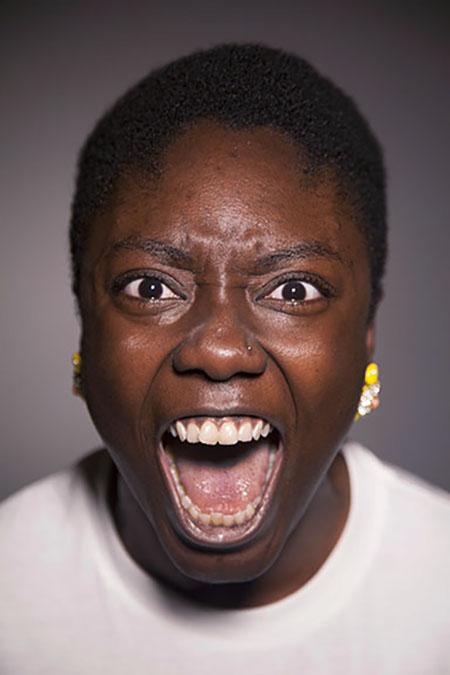 “Outcry,” a photo series by Chicago artist Whitney Bradshaw, has been ongoing since the January 2018 Women’s March, depicting a diverse range of women captured mid-scream in the artists studio. In this installation, two vast grids of these photos line a hallway, the top row stacked high above viewers’ heads, in effect surrounding us with the presence of women’s voices.

Many of the women in these images scream in pointed anger, chins trust out defiantly with eyes fixed straight ahead. Others are are screaming in surprise with eyebrows high, or in frustration, clutching the sides of their faces, squeezing their eyes shut. Some are snarling, with fists clenched and teeth bared, or screaming in solidarity, arms raised over their heads. A few are calm, almost smiling, or posed and cognizant of the camera, thus less vulnerable and less raw. But, no matter their degree of palpable emotion, Bradshaw makes us aware that no expression is less true or pertinent than another, and that there are many, many different ways to make the noise that produces change.