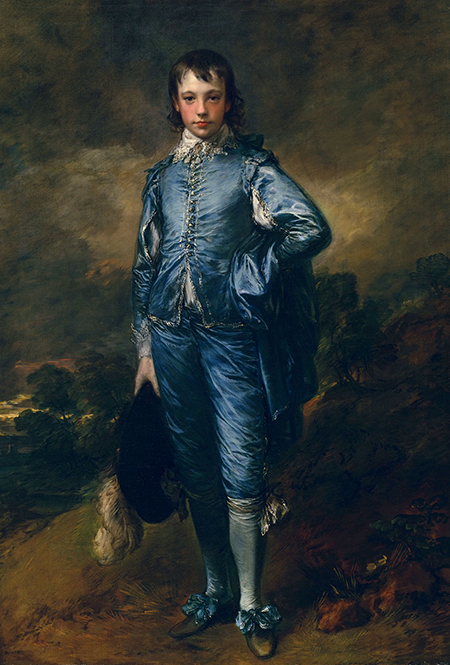 This past September the Huntington Library, Art Collections and Botanical Garden in San Marino, California embarked on a year-long exhibition of its treasured masterpiece, The Blue Boy, one of the most iconic paintings in British and American art history. Project Blue Boy constitutes an unusual blend of rather unique if not standard performance art. The project combines public engagement, art historical scholarship and art conservation education/demonstration, while providing viewers the unusual opportunity to experience first-hand an intersection of science and art.

Thomas Gainsborough (1727-1728) completed the almost life-size portrait, The Blue Boy (originally called A Portrait of a Young Gentleman) around 1770, depicting that now very recognizable adolescent youth, clad in opulent blue satin knee breeches and doublet replete with a lace collar, striding forward “out” of the canvas presumably into manhood. Scholars once believed that The Blue Boy was a youthful depiction of the painting’s first owner, Jonathan Buttall (1752-1805), but now agree the identity of the subject is unknown.

Whoever he was, the image has become iconic. Blue Boy’s outfit, with its flowing brush work and glittering surfaces was in fact the dress of the 17th century elite, but its execution and style served the added function of nodding acknowledgment to 17th century Dutch painter Anthony van Dyck -- who Gainsborough greatly admired -- while jabbing defiantly at his fierce rival, fellow English portraitist Joshua Reynolds. It was after all Reynolds who admonished artists to avoid the color blue – art historians speculate this was said precisely with Blue Boy in mind – because he thought the color made paintings seem emotionally distant and cold.  When the Huntington’s founder and namesake, American industrialist Henry Huntington, bought the Blue Boy in 1921, its $728,000 price represented the highest amount ever paid for a painting. After his purchase, Huntington arranged for the painting to travel across America, including short exhibition stops along the way, the goal being to generate great publicity and fanfare. When the work eventually arrived to its present San Marino home it had already acquired an almost Hollywood-like celebrity status. Along with its role in Oscar Wilde’s novel, The Picture of Dorian Gray, the painting also inspired German director F.W. Murnau’s now lost debut film, The Boy in Blue. The work quickly became a favorite of Huntington gallery goers, including the young Robert Rauschenberg, who is said to have credited seeing this painting as the inspiration that led him to become an artist.

The work’s art historical and popular celebrity has meant it was rarely taken down from its walls for routine cleaning during the ninety years it’s been on display. Enter the need for Project Blue Boy’s overdue and thorough conservation effort. And enter as well, like an actor stepping onto her stage, Christina O’Connell, the Huntington’s senior paintings conservator, who co-curated this project along with Melinda McCurdy, the Huntington’s associate curator for British art. For the first several months of the project, O’Connell will work at specified hours each week on the painting in full view of attending gallery goers.  Trained in art conservation, art history and, yes, chemistry  O’Connell, brings a fully-stocked art conservator’s tool box  to address and solve the multiple structural, material, and visual concerns that lay before her work station,  “like a patient etherized upon a table” to quote  T.S. Eliot.

When O’Connell’s began, The Blue Boy’s originally sparkling outfit had turned drab, dulled and weary, with many of its myriad details obscured if not nearly erased by previously unprofessional efforts at conservation. Even before O’Connell began working on The Blue Boy, the painting underwent a thorough visual penetrating look, via infrared reflectolgraphy and ultraviolet illumination.  This allowed her to examine the painting’s previous layers of varnish and old in-painting.  X-ray technology showed that Gainsborough painted The Blue Boy over an older painting of his (which could mean he wasn’t commissioned to do the work, a situation that would have merited a new canvas). Among many things revealed in this process, the image of a dog was discovered that was to have sat – if included-- dutifully at the young boy’s feet.

An informative panel of well presented text and electronic displays form a rail-like barrier between the gallery and O’Connell, sitting with her back, politely, turned to onlookers. Her co-star on this stage takes the form of the massive, angular and agile Haag-Streit Hi-R NEO 900 surgical microscope (on long term loan from its manufacturer Haag-Streit), which measures six feet in height, has a long moveable arm and that magnifies objects up to 25x and is used by doctors in ear surgeries.

At specified times, gallery goers can watch O’Connell peer through this microscope, whose movements she controls with a foot pedal.  This frees her hand and brush during this early stage of the conservation to glue and refasten down the artwork’s paint that has begun to peel away. On-lookers can get a yet more intense view of O’Connell at work via a large monitor screen next to her that’s attached to the microscope and allows visitors the same magnified view of the canvas’s surface that she herself sees.

]O’Connell will apply a new layer or skin of varnish over the entire surface of The Blue Boy, on which her in-painting will take place.  The varnish acts to visually saturate the original colors of the painting, assisting efforts to match the original colors accurately.  Varnish also acts as a separating layer to ensure that her work doesn’t alter or challenge the integrity of Gainsborough’s original work.

With a nearly year-long scheduled completion date of September 30th, 2019, The Blue Boy Project represents more of a clockbuster  than a blockbuster exhibition. On select occasions during O’Connell’s public conservation performance, The Blue Boy will sit on an easel in the gallery so visitors can observe the project’s progress. People will also be able to track the project on the Huntington’s website: Huntington.org/projectblueboy.

When completed, the revived image of this archetypal, famous youth will again glow with the vibrant, nuanced colors, modulated shading and well-articulated spatial depths. And most remarkably, O’Connell and her team will achieve  this end without the conservator’s brush ever touching Gainsborough’s original paint. While onlookers will certainly experience this as a kind of magic, every accomplished magician knows that magic is just another word for technique!