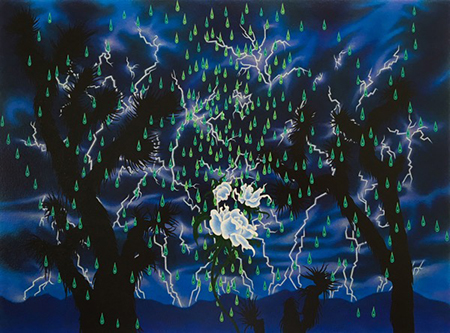 Sharon Ellis is no stranger to nature.  As a resident of Yucca Valley, a desert community that borders Joshua Tree, Ellis has ample opportunity to observe and internalize the forces of nature, a subject that has been a focus of her paintings since the 1990s. In a new series of paintings on paper, where form and color are built up through her usual method of applying numerous glazes of slow-drying alkyd, the artist calls attention to nature’s inherent patterns and, metaphorically, to the cycles of life and time. As in her characteristic paintings on canvas, the works on paper are distinguished by pristine surfaces that seem perfectly suited to conjuring up dreamlike visions of nature that are mesmerizing to view.

In several of the new works, Ellis employs predominately monochromatic fields of color to establish temperaments of longing and anticipation. In the rhapsodic “Love Song,” black silhouettes of long-stemmed rose vines appear to dance before us in a foreground set against a lush red backdrop of swirling movements of wind, light, and the vines’ own shadows. A similar effect is achieved in “Into Darkness,” where the black silhouettes in the foreground read as flat abstractions against a field of blooming flowers at ground level, and a cluster of dead branches above. The patterning functions here as a window onto a seductive midnight blue sky that sparkles with shimmering stars.

In “Desert Path” a swirling light trail appears like a magical apparition that directs us to an intensely golden sky. “Summer Rain’s” background of black tree silhouettes is placed against a dark blue sky that is animated by interacting patterns of lightning, reverently individualized crystalline raindrops, and a vine of white roses that seems to float weightlessly in the foreground. While breathtaking to behold, “Summer Rain” also functions as a simple primer on how the forces of nature interact to sustain the continuing cycles of life, death and regeneration.