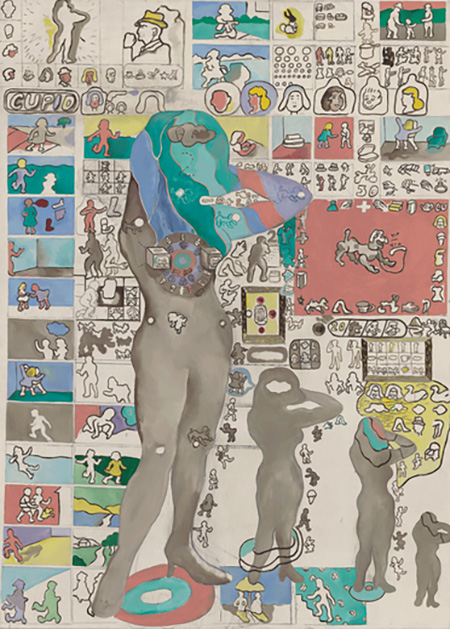 Once again, the spotlight shines on some funky pop art that emerged in Chicago in the 1960s and 70s. While the New York-centric art scene and its handmaiden, Los Angeles, infrequently share the stage with the historic contributions of the hinterland, Chicago is finally back in the house with its irreverent figurative tradition. The Hairy Who, the Imagists and their offspring have been key Pop samplers, ever since turning out seriously screwball renditions of the human condition, rendered through animated drawing, bold unmodulated color, crazy compositional complexity, and source material culled from the underbelly of Chicago's urban scene.

But why is it that now their cultural capital has appreciated? Why has Matthew Marks, a mega-gallery of the New York art mafia, picked up Suellen Rocca? Why is Karl Wirsum on the roster in the latest Matthew Marks/Naftali Green survey "Painting: Now + Forever, Part III"? And how about Barbara Rossi stepping out in London's Sadie Coles Gallery and at the New Museum in New York? Fondazione Prada in Milan just showcased the Chicago popsters in "Famous Artists from Chicago: 1965-1975," and Lynne Cooke featured Chicago's merry band in her recent "Outliers and American Vanguard Art" at the National Gallery. But the best example of Chicago's ascendancy is surely Christina Ramberg's corseted figure splashed across February's Artforum (no Chicagoan has graced the cover of this bellwether journal as far back as I can recall). So perhaps it's that enough time has passed for the big names of the Pop canon to have have exhausted their wow factor. Chicago now provides a fresher take on the era (not to mention a fresh market opportunity).

And it's not just that the work is getting out, but that it is receiving renewed, critical attention. One of the latest scriveners of the Chicago story is the historian Dan Nadel, who has been writing up a storm. He follows in the footsteps of beloved local critic and teacher James Yood, who passed this year, and the brilliant Dennis Adrian, also recently deceased. Nadel curated the 2015 Matthew Marks exhibition, "What Nerve! Alternative Figures in American Art 1960 to the Present," which sought to correct the record of important figurative traditions in the 20th century. Chicago artists loomed large in that project.

Ferreting out more of the great figurative and comic-inspired styles of Chicago's past in part reflects the interest in caricature in painting today. Consider the popularity of such artists as Nicole Eisenman, Sue Williams, Caroll Dunham, Peter Saul and Dana Schutz (who was already popular before the Whitney curators' "Open Casket" fuck-up). This kind of exaggerated figuration is clearly back, and its' Chicago antecedent is persuasive.

There is also a feminist story here in our moment of corrective inclusivity, for turning to Chicago provides a cache of relatively under-examined women artists. If Warhol, Lichtenstein, Rosenquist and Ruscha reigned supreme in the original Pop narrative, and if it was Ed Pashcke and Jim Nutt, along with perhaps Roger Brown who fared best in Chicago's version, let's now entertain some of the ladies so as to even the score. This is not to suggest that the work was anything but tantalizing to begin with. Ramberg's short career upped the ante on depictions of the objectified female body — a relentless leitmotif throughout Pop. Rocca's odd arrangements of domestic accoutrements — cartoon handbags, night lights and bowling trophies — are humanist rejoinders to the anonymous objects of a Lichtenstein or Warhol. And Rossi's composites of biomorphic parts or Gladys Nilsson's super bizarre elastic caricatures stack up well against the lurid expressionism of a Peter Saul.

Yood speculated that the distance from the coasts allowed for the peculiar regionalism of our Chicago artists, one typified by prizing both high art and lowbrow culture. The Chicagoans didn't reject the canon, indeed most were educated at the School of the Art Institute of Chicago. These artists absorbed modernism's lessons about the primacy of form, discovered the great collections of Surrealism and its psychological intensity, and they greatly expanded the notion of "primitivism" as a vital source for image generation. The impulse was nurtured by key teachers, including Kathleen Blacksheer, Whitney Halstead and Ray Yoshida. More than their cool cousins to the east and west (San Francisco funk art being an exception), who tamed the expressive hand of the artist in favor of unsentimental appropriations drawn from mass culture, Chicago embraced a promiscuous range of vernacular and fine art sources to conjure the complexity of being. Unlike the slickness of Madison Avenue that fed New York Pop, artists of the Midwest were more accepting of populist genres and outsider motifs. As a result, Chicago Pop is just quirkier.

There will be another opportunity to assess our Midwest artists when The Art institute of Chicago opens its "Hairy Who? 1966-1969" exhibition this fall. Such a significant museum show around the 50th anniversary of the 1968 protests contextualizes the Hairy Who within the larger counterculture of the 60s and 70s. And here is the takeaway: Chicago art has historically rejected establishment values, and that's why it's increasingly relevant. With their healthy disregard for trends and fashions, Chicago artists addressed our everyday fears and anxieties, exteriorizing such subconscious states in weird and often grotesque depictions of the body. What we are seeing is the confirmation of the value of eccentricity, something that the Midwest has represented right along. Chicago reminds us that we are all deeply, and sometimes darkly individual.