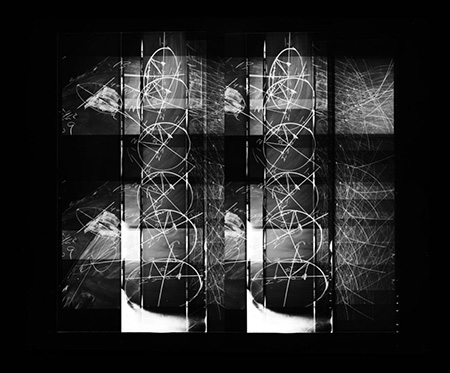 Considering that photographer Paul Berger’s oeuvre of 40 years is so extensive, this selection is maddeningly incomplete, including as it does barely 20 prints. Nevertheless, it’s a fascinating glimpse into the art of a man who early on explored seemingly all the future directions of photography — digitization, computers, multiple-imagery, to name a few — but seems to have gotten lost in the shuffle toward the complete incorporation of photography into the mainstream of contemporary art.

Berger was educated at UCLA (BA, 1970) under the influence of Robert Heinecken, and later studied with Nathan Lyons at the Visual Studies Workshop (MFA, 1973). Whether photographing blackboards with mathematical formulae over a six-month period, altering news media photography, or constructing landscape imagery into blocked-off developers’ grids, Berger approaches his subject matter with an eye to altering it and transforming the way the viewer perceives the world. The exhibition is accompanied by an interview and a monograph by Minor Matters, a high-end photography book publisher. Berger’s instruction, conveying photography’s transition from technical document purveyor into art form (he is a professor emeritus at the University of Washington) is reflected in all his imagery. In the process, California’s political history, for example, in the form of Governor Ronald Reagan’s attacks on Berkeley protesters, is highlighted and later joined by scenes of endangered urban forest trails in Seattle. The “Seattle Subtext” series overlays text imagery from newspapers with found imagery with snatches of his own street photography. Advertisements, book reviews and other mass-media components are satirized, obfuscated and assembled into layouts that both delight and confound.