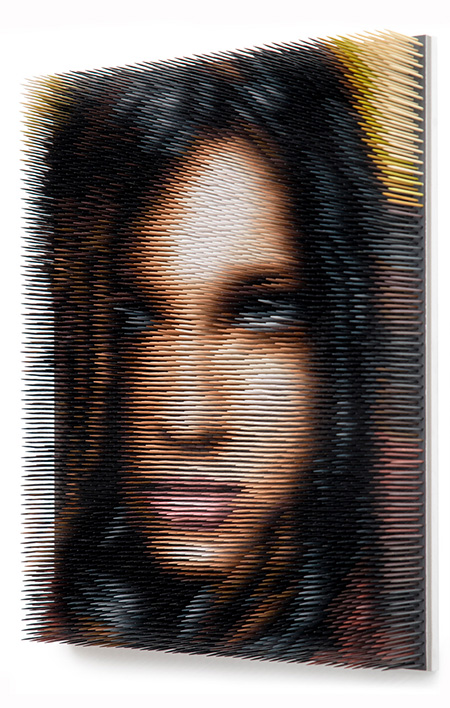 Maxim Walkultschik’s lifelike portraits shimmer mysteriously and vibrate with intense color from a distance. They are constructed from tens of thousands of wooden dowels roughly the size of toothpicks. Some are placed at a 90-degree angle to the picture plane, while others are laid adjacent to one another in horizontal patterns. Walkultschik painstakingly hand-paints each dowel. The catalogue includes a photograph of the artist sitting in front of numerous containers filled with the small painted sticks that eventually comprise his paintings. A computer program guides their placement on the surface. Like pointillism, they exploit the eye’s ability to blend discrete units of color into a lifelike image. And like optical art, the effects of these color interactions vary depending on one’s point of view. The colors are positioned to create a three-dimensional effect as one moves in relation to the work.

Walkultschik always works in series, here it is “Carpets,” a Persian-carpet motif that lends itself well to his method. With titles like “Azar,” “Anahita,” and “Arash,” they, as well as the title of the show, evoke tales of the Islamic Golden Age that were collected as “One Thousand and One Nights,“ first published in English in the early 18th century. His portraits of women, which are part of an ongoing series of “Optical Portraits,” are equally exotic. “Kaliande” is particularly beguiling, her kohl-rimmed, almond-shaped turquoise eyes entrancing us with an intense gaze. “Ismenia” wears a garland of flowers on her head. Ismenia was a river nymph in Greek mythology, and the artist selected her name for its similarity to the Russian word izmenis, which is a plea for change, a call for progress. Other portraits reference celebrities like the late Latino singer “Selena” and the Russian YouTube beauty, “Valeria Lipovetsky.” Walkultschik’s series consistently reflect his evolving and obsessive investigation of perception.