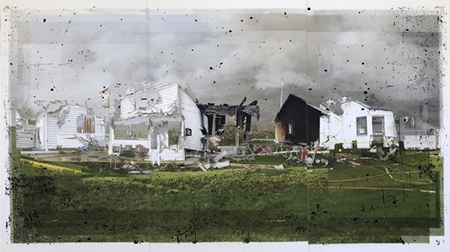 False images can create false memories — recollections that the mind obstinately clings to, even when faced with the facts. If it was once shocking to realize that photographs do not necessarily present undeniable truth, we are now accustomed to the ease with which pixels may be twisted: parts removed or replaced, only to be invisibly sutured back together into something diabolically different.

This kind of visual prevarication is not limited to bad actors. Various kinds of engineering, always to some extent present in photo journalism, have become commonplace. A substantial portion of the submissions to the World Press's 2015 Photo Competition were disqualified for manipulation, and the first place prize for Contemporary Issues was revoked because of allegations of staging and/or misleading captioning. In a survey subsequently filled out by about a third of the contest's entrants, a majority of respondents admitted to sometimes staging photographs. Twelve percent said they did it "at least half the time."

While there is clearly a difference between staging and digital altering — not to mention between photojournalism and the practices of art — such facts lead to speculation about the complex role that manipulated images presently have within the art world, where there is no pretense that a picture equals reality. The spectrum ranges from Andreas Gursky's completely fabricated yet real-looking images, to the sometimes-journalistic practices of notable art photographers like Jim Goldberg or Martin Parr. Like film stills, Jeff Wall's tableaus and Cindy Sherman's self portraits offer better-than-real fictionalized versions of modern life, while image makers like Paul Mollison move back and forth between composite works and straightforward documentation.

But what of the present moment? When all images can be doubted, and mainstream media is held in contempt by a significant number of Americans, is it art's job to figure out a way to make photographs reveal the truth? Is that even appropriate given that cultural practice must be first and foremost aesthetic? Deborah Oropallo's video montages suggest one way of responding to this question: through an accumulation of images so sensorially overwhelming that denying their veracity becomes impossible. Oropallo scours the internet for oil slicks, burning rigs, fires and floods, putting three to four hundred pictures into a single work, layering them over each other with a metronomic relentlessness, until they have hammered home a story seen only fleetingly, whether on television or internet. The news cycle — 24 hours or less — has become so short that the vast majority of these photographs of appalling disasters, though released to public view, are soon buried by the advent of a fresh event.

Oropallo's videos and altered digital prints suggest a new kind of hybrid: art that that can operate in a way that journalism can't, because it can step outside the who-what-where-when rules. By recontextualizing and re-presenting these disasters in a way that makes what really happened — and continues to happen — Oropallo makes them all but impossible to ignore. Like a call to arms, these dystopian land-and-seascapes are eloquent reminders that the facts are there for us to find.