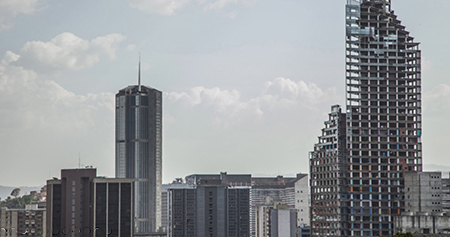 “Casa Tomada” takes its title from Julio Cortázar’s 1946 short story of the same name, which translates as “House Taken Over.” The story follows two siblings and their desperate attempt to maintain their ancestral home until an unnamed presence forces them out. This narrative, as well as the exhibition, brings up questions of property, boundaries, and the maintenance and violation of physical and emotional space and memory. Over twenty artists, organized by three curators, incorporate a vast range of media, including photography, performance, sound and installation, to explore the concept of occupation.

“Casa Tomada” incorporates an impressively broad range of media from artists working internationally. While this risks producing a chaotic take on an already broad concept, the cultural diversity of the exhibit allows a rare and often personal glimpse at how different societies approach boarders. Whether cultural groups place more value on private property, the communities they create, the ecological impact of globalization, or simply freedom of ideas, “Casa Tomada” forces us to ask: do the physical and emotional boarders we create keep us safe, or do they lock us up?

Naufus Ramírez-Figueroa’s “Revindication of Tangible Property” installation is one of the most imposing pieces in the exhibition. The large-scale mobiles incorporate wooden poles which resemble human arms. From them, smaller sculptures of household objects are suspended, spanning the height of the gallery. The piece was commissioned for the biennial and draws from the Mayan book of creation, where domestic objects rebel against human disregard for them. The piece has a magical quality that takes a lighthearted approach to exploring what might happen if the objects we take for granted take on a life of their own.

Ángela Bonadies and José Olavarría incorporate a series of photographs in their piece “La Torra de David” to document the squatting of a bank’s unfinished high-rise tower in Caracas, Venezula. The photos are a stunning and emotional depiction of domestication in a liminal space. Also working with photography, Paz Errázuriz’s series “Niñas (Girls),” incorporates digital prints of analog photographs of sex workers in the city of Talca, Chile, between 1968 and 1976. These intimate photographs offer a glimpse of relationships and moments of joy that lie behind the walls of a brothel.

Victoria Mamnguqsualuk’s drawings and embroidered textiles explore Inuit mythologies around consumption, violence, shapeshifting, and animal hybrids. These images draw from oral tradition, and therefore depict moments in which the boundaries of the physical forms of animals are tested and transformed. From nearby Gallup, New Mexico Eric-Paul Riege incorporates mixed media to pay tribute to Na’ashjé’íí Asdzáá, or Spiderwoman, the Holy person who taught the Diné people to weave. Using looms, Riege re-creates the boundaries of Spiderwoman’s cave, while regalia representing the subject herself lies within.

Hock E Aye Vi Edgar Heap of Birds presents an installation of 48 red monoprints and their ghosts, which draw from the history of the 1868 Washita Massacre, led by Colonel George Custer in Oklahoma, contrasted with popular music lyrics and recent military invasions. The piece is a moving study of the boundaries (or lack of boundaries) of historic events, and how their reverberations will never cease to be felt.

Containing his dioramas within ring boxes, Lisbon-based artist Curtis Talwst Santiago creates portable worlds that can be carried and viewed anywhere and anytime. A number of his tiny scenes appear within a glass house. The installation brings to mind the playfulness of the worlds we create to satisfy our imaginations, and how we contain and view them.