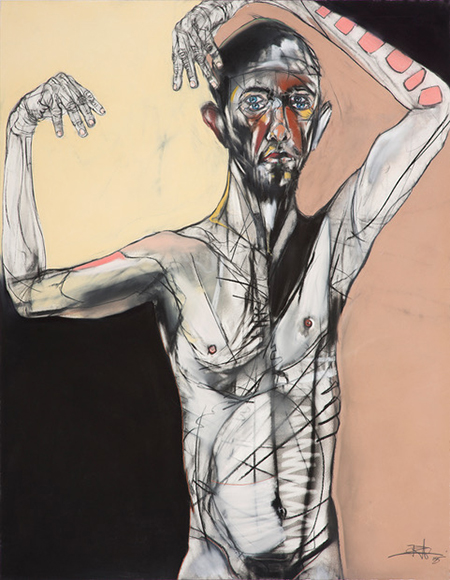 Like Chuck Close, Cindy Sherman and other artists who work in self-portraiture, Kris Hargis takes a career-long look at his own visage in different guises. In “A Michigan Winter” he maintains an unsparing focus on the self. Hargis, who is affable, hale and seldom seen without a broad smile, presents a different persona in these mixed-media works on paper: gaunt, melancholic and haunted. There is more than a touch of Egon Schiele in the elongated style with which he handles the nude and semi-nude form, but while Schiele’s figures crackled with perverse sexual energy, Hargis’ figures seem consumed by an existential identity crisis.

“Holding the Light” is a harrowing vignette in which the subject stands contemplating an unseen force overhead. His eyes are cast upward, as if dreading the judgment of God. The figure in “Ol’ four eyes (FPO image)” poses with arms artfully raised, eyes doubled in a disconcerting, fuzzy-focus illusion. “Cass Street Bouquet” delivers some relief from the unrelenting introspection; Hargis has a gift for floral still lifes, and imbues this piece with fine detail and delicacy, setting the vase and flowers on a table rendered in nonobjective planes.