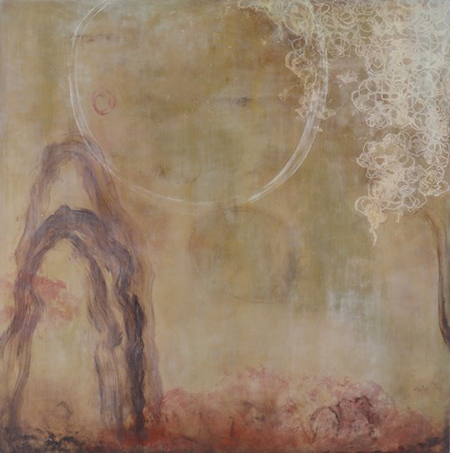 Painter Michele King and sculptor Truong Tran explore the visible spectrum and the implications of vision in “Illumination: The Poetics of Light,” curated by Courtney Norris. Norris sees King’s evocative paintings, which are abstractions with some figurative elements, as “merg[ing] fictional and real spaces to form a symbolic journey towards home/self.” Tran’s complex, intricately crafted constructions, contrast geometric containers with organic forms so as to “explore proximity and distance,” inviting inspection from both close up and far away, from detail to overall gestalt.

King’s “psychological landscapes,” as she calls them, are a series of mixed media works (acrylic, watercolor, ink, house paint, graphite on panel) dating from 2005. Also included are sixteen works made within the past three years. The muted gray and brown palettes and misty landscapes suggest solitary nocturnal reveries. The female figure in “Stargazer,” turns away, contemplating the cosmos, a contemporary riff on Caspar David Friedrich’s rapt nature mystics. There’s no viewer surrogate in the other large paintings of ambiguous, “otherworldly spaces.” It is we who are confronted with the mysteries of being in “Here and There,” with its echoes of Chinese landscape painting. So too in “Eris,” (the Greek goddess of discord), with its glimmering life-forms reminiscent of Odilon Redon; and in the Turner-esque “Field.”

Tran’s twenty-two assemblage constructions evoke, with their clear acrylic boxes, the worlds of science, objectivity and observation: seeing without preconception or interpretation. That said, the works, which include such contemporary materials as LED lights, frosted and metallic mylar, acrylic cabochons (jewels), edge banding, acetate, flagging tape, spray bottle caps and 35mm film canisters, raise issues about perception and interpretation. An illuminated group of four six-foot tall color samples is titled ”When It’s Not About Race, It’s All About Race,” comments on our era of bad feelings and fake news (and no collusion, or no big deal). Within this compartmentalized format, which would seem limited, Tran achieves amazing results by arranging edge banding (the commercially made tape for covering rough-cut plywood) into dizzying whorls and spirals that are both floral and cosmic, in the complementary works “The Sky Above” and “The Earth Below”; in two “Fraternal Twin” pieces; and in three “Wanderings.”