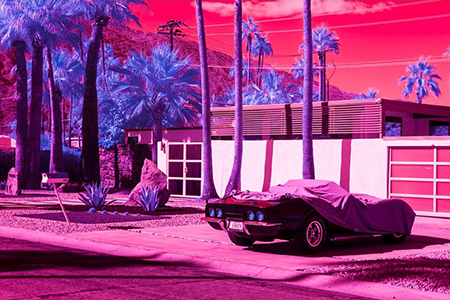 If taken to its visual extreme, can hyper-saturation lead to transcendence? This isn’t Australian photographer Kate Ballis’ M.O. In her series “Hypercolour Fantasy: Infra Realism,” which features 13 pigment prints, each 39 by 59 inches, a vivid spectrum of purple and indigo flora, hot pink landscapes and houses, and scarlet red and pink skies are set in and around the Palm Springs area. Ballis appears instead to be sending up that iconographic desert oasis in two ways. First, by the application of an over-the-top color palette, which feels especially apt in photos such as “Birds” and “Liberace” (the former a poolscape with flamingo inflatables, the latter the façade of the late singer’s Palm Springs digs). Secondly, through her use of filters on a converted full-spectrum camera (the source of the infrared capabilities), she has transformed, even reversed, a dry, barren and nearly desaturated land-/motelscape to the opposite end of the saturation spectrum.

Though the colors are otherworldly, we’re still in the desert, with Joshua trees and mid-century modern homes. We haven’t quite been transported to a far-off planet (for historical context, one might recall Stanley Kubrick pushing the boundaries of filters in “2001: A Space Odyssey”). Ballis’ role as a travel photographer can’t be ignored here: this is every bit a travel photography portfolio, given the straightforward depictions. The infrared application provides modest gravitas. In reproduction, these images become as arresting as they are strangely seductive. But in person, with the images seen in concert, the saturation becomes oppressive. While they may thrive in glossy mags or on travel websites, in the gallery there’s ultimately so much optical intensity as to leave transcendence out of reach.