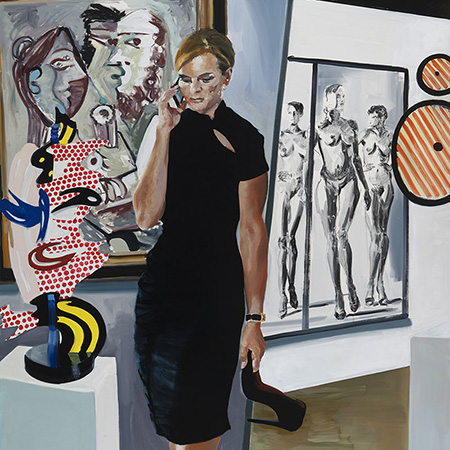 Eric Fischl came to prominence in the early 1980’s as part of a general movement that focused on the “return” of painting and an interest in the figure. Specifically, Fischl’s early work contained voyeuristic scenes of suburban American life. Since that time he has honed and modified minute stylistic gestures, concentrating instead on investigating a growing variety of themes. The series known as the “Art Fair Paintings” figures prominently in this large-scale exhibition, where the artist brings his critical lense to bear upon the now ubiquitous art fair phenomenon.

Fischl makes use of collage to discover the right composition of figures to occupy familiar settings in his highly complex and mysterious paintings. The images offer sexually and psychically charged narratives and tense situations, dripping with an ambiguity as to what exactly is really happening. His use of postmodernist strategies, such as appropriation, allows for the placement of recognizable art-works in the images. In “Art Fair: Booth No. 4 The Price” (2013) and “Her” (2016) he situates his protagonists inside the booths of art fairs where they cavort among nudes, take pictures, talk on the phone and make secret deals.

This tactic results in paintings that attest to both the seductive side of the money and transactions flowing through the art fairs, as well serving as a pointed critique of power relations and inequality. This is clearly evident in the compelling “Rift/Raft” (2016), a long horizontal painting bisected centrally into two distinct and dialectical images. On the left a decadent scene in an art fair consists of revelers engaging in a sort of bacchanal among abstract paintings. This is contrasted on the right side with the plight of migrants struggling to make it to shore, apparently escaping one of the many calamities unfolding on the world’s stage today. His signature style can at once mesmerize and shock, even after more than 30 years. The irony, of course, remains the fact that he targets a system he’s very much a part of.