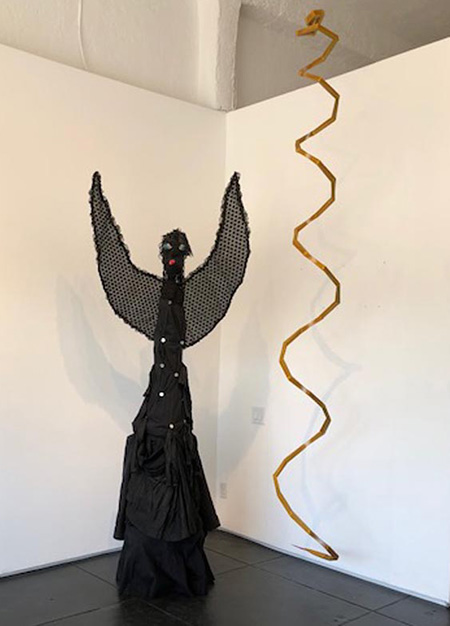 Mary Hayslip has transformed the gallery into a fantasy garden filled with handmade flowers and imaginary creatures. Angular snakes hang from the ceiling, kaleidoscopic flowers dot the walls, a frog sits on a lily pad and two “spirits” are suspended from the ceiling. According to Hayslip, nature is her inspiration. Her flowers are assembled with brightly painted wooden sticks, toothpicks, and thin sheets of wood shaped into petals. The snakes are made from wooden sticks cleverly joined together with thread, and her hanging figures are constructed with thick, white nylon rope.

Greeting us at the door is “Angel of Good Wishes,” a nearly eight-foot-tall black sculpture with lacy outstretched wings. Her large expressive eyes are created with beads, and a protruding red tongue gives her a devilish appearance. “Big Spirit” and “Small Spirit” are woven female figures hanging upside down from the ceiling. Faceless, they have long curly hair that nearly touches the floor. Their visual impact is mixed; on one hand, they appear to be bound against their will; paradoxically, they elicit an ethereal quality. There are 34 meticulous pieces in the show, each one reflecting a sizable commitment of energy and imagination.

A native Houstonian, Hayslip is a self-taught artist who works in multiple mediums, including collage, ceramics, textiles, beads and found objects. Since 1974, she has lived in a 1920s bungalow that belonged to her great-grandparents, transforming every facet of her surroundings into art. One of her black rope dolls was adopted by Mydolls, a local girls’ post-punk band formed in 1978 that still performs today. They call the doll “Betsy” and take her to all their performances, propping her up against the bass drum. Betsy even inspired the band’s logo. Another noteworthy Hayslip-created installation is the mirrored mosaic entryway of the popular Chuy's Tex-Mex restaurant in Houston’s River Oaks neighborhood.