For the “LOVE” of Indiana
Editors’ Roundtable
Column by Lisa Wainwright 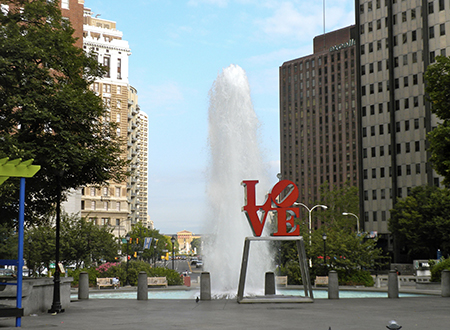 Robert Indiana, who died at age 89 this May, has remained immensely popular with the public for decades but is frequently snubbed by art world cognoscenti. Such a contradiction of reception vexed me enough to make a pilgrimage to a few of his free-standing "LOVE" sculptures. It seemed timely to reflect on the works given the current debate raging around the matter of monuments in the civic space. This word sculpture speaks universally in the public sphere, offends virtually no one, yet might have more to offer then what first meets the eye.

Dozens of "LOVE" sculptures dot the globe. They can be found from Indianapolis, Indiana, the state where the artist hailed and the name he took when he abandoned Robert Clark in 1958, to Jerusalem where the piece was neatly translated into stacked Hebrew letters. I took in the 144 x 144 x 72 inch polychrome, aluminum stacked letters that loom in blue and red, on the busy corner of West 55th Street and 6th Avenue in New York City, and I was joined by a long line of delighted tourists waiting to take selfies. The word square rests on a substantial black plinth. It is legible from only one side (south), but its back facing 55th is still recognizable — a tribute to the iconic familiarity of the piece. The side views become big red undulations, easily mistaken for more minimalist plop art if one were limited to that vantage point. In Philadelphia, a version in the John F. Kennedy Plaza, better known as LOVE Park was recently renovated. This "LOVE" is smaller and in purple, green, and red. It rests on a tall, metal armature, adding more height while allowing viewers to pose underneath for photos. In both New York and Philadelphia, the tourists queued on lines awaiting their moment to stand or sit in the nimbus of love. Clearly, Indiana's sculptures are performative and interactive; with the currency of thousands of photos on social media, these postings amount to a version of the work as universal as the physical objects themselves.

Indiana first conceived of the "LOVE" series in 1966 as paintings and prints, then MOMA was swift to commission Christmas cards and so began the commercial appeal. Indiana was also writing concrete poetry at the time, with the concept simmering in shaped text. In "Wherefore the Punctuation of the Heart" (1958-1969) he uses the LOVE graphic in blue and white with shaped text that describes love as "Ecstatic, Erect, Erotic" — more on that naughty bit shortly. The graphic design of LOVE was strong, influenced by the Pop art and hard edge painting that was very much of the moment in the art world of 1960s New York. It was the immense success of the graphic that overshadowed the rest of his career. Indiana exiled himself to Vinalhaven, Maine in 1978, where he lived and worked for the next 40 years.

Part of the interest of the "LOVE" sculptures might be their conflation of fine art and design, a practice shared with other Pop artists that has become increasingly de rigueur, as in the work of Andrea Zittel or Superflex. Granted these are very contemporary examples of artists boldly collapsing disciplines, but Indiana presages the idea. "LOVE's" graphic design aspect — the composition, color, and Didone font with the dynamic 'O' tilted on its side — were super groovy design features as befitted the expectations of the 60s. But its translation into a 3-dimensional monumental work of art was quite avant-garde. This likely offended many of the modernist purists of the time. There are very few sculptors who have used words as the structural core of their work, and those who do, followed in Indiana's footsteps.

Santiago Sierra, for example, a Spanish artist who traffics in the concept of negation, did a traveling sculpture of the word "NO" in 2009. In his "NO, GLOBAL TOUR," a 5 x 13 foot "NO" in Arial typeface, weighing half a ton, was schlepped around the globe on the back of a flatbed truck. Sierra acknowledged Indiana's "LOVE" as a source but opined that Indiana's choice of word spoke more of the 60s, while "NO" was a sign of his time. But from Jesus to the latest Beyonce and Jay Z tunes, love as a concept or cultural sign has always been in play. If the 60s hippie culture and the summer of love was a strategy to challenge the growing military-industrial complex, then bring it on again, and again, and again. Not enough has changed in that regard.

It turns out Indiana's "LOVE" sculpture is more political than has generally been acknowledged, and there is plenty of precedent in his oeuvre that anticipates politically charged work. The "Confederacy" series (1965) commented on the civil rights struggles taking place in the South. He did an AIDS project in 1989, echoing the stacked letters of "LOVE," and his "Peace" series (2004) was a response to the wars in Iraq and Afghanistan. Indiana was a gay man, but this bit of biography has been conveniently absent in most of the well-known narratives. In 1966 — three years before the Stonewall riots — for a gay man to produce a monumental sculpture on the subject of love was to covertly assert a more diverse reading of the word and the act. I'm not saying it was the Trojan Horse of gay love, but the sculpture may fairly be regarded as his non-exclusionary way of addressing love's multiplicity and difference. It should therefore be read as a deliberately subversive decision in the context of 1966. Hidden in plain sight is the willful non-specificity of this word and the possibility of a more open conception of who and how we love — all in public spaces across the nation and the world.

In the face of potential challenges to the legalization of same-sex marriage with the likely appointment of an extreme conservative Supreme Court Justice, let us line up in front of Indiana's "LOVE" sculptures, and circulate our selfies of queer love — unregulated, open, and free. Robert Indiana wasn't lauded by the art world, but his work was beloved by the masses who continue to turn out, over 50 years later, to memorialize that which belongs to all genders and sexual orientations.