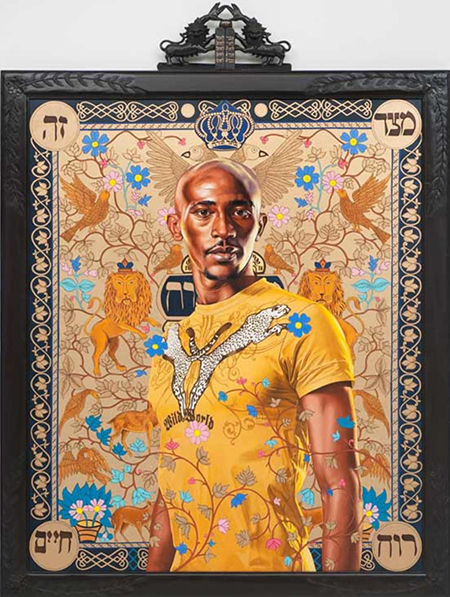 Kehinde Wiley’s “The World Stage: Israel” consists of only two large-scale portrait paintings, both are technically so superb and detailed that one can spend hours exploring the canvas, discovering new things. Their sense of joyfulness and liveliness prevents them from feeling overworked. Wiley combines a European Old Master style with a personal style that has made him into a paragon of postmodern art. The two hip-hop loving black men portrayed in Wiley’s paintings are from the Ethiopian Jewish community in Israel, presented as heroic men who don’t allow themselves to be disheartened by the immigration challenges that have been an issue featured recently in the international news.

Light radiates from their faces. Their muscular bodies blend in with the decorative background. Wiley's pair of paintings also have Hebrew calligraphy in them, suggesting the influence of Israeli culture in the protagonists' lives. Based on concepts of identity, diversity, equality, assimilation and the sublime, they symbolize the idea of a just and peaceful multicultural society. Wiley, who is popularly known for his portrait painting of President Barack Obama, continues to build an impressive body of work.