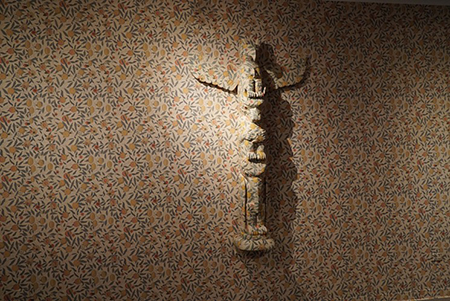 Nicholas Galanin’s exhibition prompts us to consider a fundamental question at the heart of contemporary American society: Whose land are we living on? And what does that mean for the way we live our lives? Galanin is uniquely positioned to explore such questions. A Tlingit/Unangax artist of mixed Native and non-Native heritage, he’s steeped in both indigenous and settler culture. Here, he lays bare the ways colonizers have appropriated and commodified indigenous ways. A multidiscipline artist, the exhibition includes sculptures, prints, textiles, ceramics, video and more. Taken together, they effectively convey the breadth and depth of Galanin’s facility with transforming materials even as he alters our perceptions of popular iconography.  Titled “Dear Listener,” this mid-career retrospective is an exquisite meditation on the intersections of Native and non-native cultures, at once a clarion call for indigenous peoples to claim and manifest their own strength and beauty, and an indictment of those who’ve sought to squelch indigenous power with their own hubris.

The largest exhibition of contemporary American Indian art here to date, it’s a powerful reminder that Native culture is here and now, rather than limited to artifacts from the past. Galanin’s body of work addresses colonizer attitudes and actions — both present and past. Most striking is “The American Dream is Alive and Well,” which gives the head of a polar bear a body formed of an American flag, complete with claws of large bullets. With sharp gold teeth, the bear is a poignant testament to the greed and violence of colonization, fueled by misguided notions of manifest destiny.

Nearby is “White Noise American Prayer Rug,” a fiber work that resembles a big-screen television screen mounted on a wall, with only static filling its frame. It’s an apt metaphor for much of what is wrong with contemporary American culture — infused with literal and ideological noise, boxed within four walls as if to protect itself from people or ideas that challenge its homogeneity or supremacy.

Within an American ethos of individualism and competition, Galanin demonstrates the majesty of cooperation and shared wisdom. For this exhibit, it’s exemplified in works created with collaborators, including Nep Sidhu and Meredith Johnson. For “Creation With Her Children,” a sculpture that references the female figure of Creation, Galanin and Johnson make smart use of a blue tarp that signals displacement wrought by colonizers. It’s especially poignant in the context of American policies towards recent undocumented immigrants, who’ve endured family separation and confinement within tented quarters. This sculpture calls up the images of Central and South American children shielding themselves with government-issued silver tarps.

Galanin’s collaboration with Sidhu addresses the prevalence of violence against indigenous women in a series of gowns they call “No Pig in Paradise.” The textiles’ haunting aesthetic stems from the interplay of intricate beadwork with mysterious forms.

The artist also effectively collaborates with his brother, Jerrod Galanin. Together, they go by the nom de plume of Leonard Getinthecar. For “A Supple Plunder,” the brothers set a series of sculptural men’s torsos atop square columns aligned in a row, one behind the other. A single bullet appears to have pierced each one, a reference to a dozen Ugandan men killed by Russian invaders.

The show also considers pop culture’s appropriation of Native American imagery in a photograph titled “Things Are Looking Native, Natives Looking Whiter,” which features the half-faces of two women. One is an unmarried Hopi woman wearing a characteristic hair whirl on the side of her head. The other is Carrie Fisher, sporting the iconic hair style of Princess Lea in the “Star Wars” saga.

The exhibition also draws on a host of other issues, from police brutality to religion’s role in oppressive systems. Americans are hesitant to hold a mirror up to themselves in the present moment, but that’s exactly what this exhibition calls on us to do. For those who’ve intellectualized our colonizer past, Galanin brings forth the visceral realization that cultural domination and genocide are on the increase today, and that all are bound to perform acts of radical change.