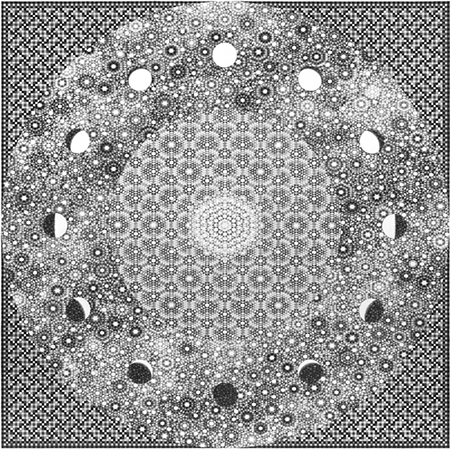 What is the difference between representation and illustration? Eric Beltz’s new work poses and possibly answers this question. Widely exhibited in Southern California as well in solo and group shows in New York, Germany and Great Britain, Beltz offers seven small graphite drawings that give us a glimpse of his vision and considerable talent. It’s hard to understand why critic David Pagel called Beltz’s work “thrilling” in a review appearing in the Los Angeles Times last year, given that they are “little gestures” that “accumulate to form meaningful wholes.” Compared to the “nanoseconds and impatience” Pagel claimed most audiences have, perhaps the point can be conceded.

Quietly, however, the drawings combine landscape, astronomy and graphic-novel fantasy imagery into ultra-meticulous scenes that are full of intricate linear patterns and wavy passages. Although the titles are of representational scenes, the drawings verge on abstraction, which is their strongest suit. A decade or more ago, Beltz’s art was lifted for illustrations in an anthropology textbook. In 2005 and again more recently, his art has been associated with drug-dependent imagery as in “The Psychedelic Landscape” in Juxtapoz magazine, a pop-culture journal, and “Acid Waves” in Santa Barbara, where Beltz teaches drawing at UCSB.

The small to medium-size drawings here average two feet square and vacillate between landscapes and skyscapes, the latter of which may be read as completely non-objective. When he crops out the representational elements his work becomes more interesting. Conversely, when — based on these examples — the art becomes more specific, with little birds in flight and palm trees poking up from the bottom edge, it is a recipe to lose our interest.

For example, “Night Sky Reflections” (2017) and “Night Sky, New Moon” (2016) summon up memories of abstract expressionist Richard Pousette-Dart, regionalist Charles Burchfield, and even Pacific Northwest mystic Mark Tobey. These images favor all-over, center-less compositions, proposing refined gradations of dark and light, and subtle, internal divisions of space. “Night Sky Reflections: Waning Moon “ (2017) slices through the field of concentric circles with six wavy horizontal curves that could be read, on one level, as interstellar gas, but which read more satisfyingly as collisions  of linear and spherical imagery. Elsewhere, circles are jostled by triangles, squares, and hexagons. In these cases, the spectre of M. C. Escher appears, making one recall the Dutch ex-scientific illustrator turned fantasy-architecture etcher and printmaker so popular in the 1960s and 1970s for his infinity vistas and trippy descending (and ascending) staircases.

More satisfying than the landscape scenes such as “Dawn Horizon” (2017) or “Dawn Sky Crescent Moon” (2016), “Daylight August Moon” (2017) and “Night Sky Moon Calendar” (2018) border on hypnotic and, like Pousette-Dart, defy conventional spatial concerns such as depth, flatness and surface. They waver in and out of the eye’s perceptual field. “Daylight August Moon” is pale gray, covered in tiny circles with a partial circle or “moon” off-center. The effect is radiant and bustling. “Night Sky Moon Calendar” is the most complicated composition and the most interesting. Like a mandala or Tibetan thanka painting, it pits worlds against worlds, rotating phases of the moon around an inner burning sun. All Beltz’s devices are in play here: geometric shapes, dynamic compositions that can hover, and exquisite modulations of black, white and gray. This expression of formal qualities strengthens Beltz’s art considerably.

Those two works contrast with the borderline illustrational and pictorial qualities of “Dawn Horizon,” with those cute palm and eucalyptus trees at its base, and “Dawn Sky Crescent Moon,” with its truncated treetops and fleeting bird. At 13 inches square, any intimacy of encounter is marred by its placemat or jigsaw-puzzle scale.

Beltz’s intensity of encounter is better suited to his fields of shapes and mark-making, not his evocation of regional sites. The skies may be Californian in origin, but they migrate well to Seattle, unlike the landscape elements which feel like a weakness for comfortably identifiable imagery. In this sense, Michael Knutson of Portland and the late Francis Celentano, avowed optical perceptualists, better push forward the interactions of geometric shapes. It would be fascinating to see if more of Beltz’s other work also reinforces my belief that his brighter future is as an abstract artist without recourse to the reassuring sentimentality of trees and shrubs.