The Museum as a Creative Laboratory
Editors’ Roundtable
Column by David S. Rubin 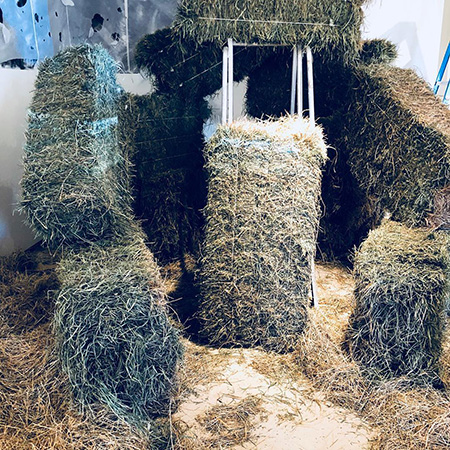 It was not so long ago that an artist's studio was considered a sanctuary of sorts, a private space where the artist is free to unleash creativity in isolation, removed from distractions and oblivious to the outside world. During the height of his career, Jackson Pollock made his drip paintings in the solitude of a barn on the premises of his home in Springs, New York, where he could be fully at one with his medium.

In the years that have passed since the 1950s, the rise of artist residency programs around the world has changed the manner in which many artists create. Typically such programs operate something like a summer camp or college campus, in that several artists are selected to spend a designated amount of time sharing communal live and work spaces, often in idyllic settings that promote inspiration. Some of the most successful and enduring residencies include The Rockefeller Foundation Bellagio Center Residency Program in Bellagio, Italy; the Anderson Ranch Artist-in-Residence Program in Snowmass Village, Colorado; the Yaddo residency in Saratoga Springs, New York; and the venerable Macdowell Colony in Peterborough, New Hampshire. One of the main purposes of these programs is to foster creativity through community. Put a bunch of talented creative folks in a contained environment and hopefully sparks fly as artists exchange ideas, critique one another's work, and bond by sharing a communal sense of purpose. One of the chief criteria for getting into a residency program, in fact, is an artist's reputation for getting along with others.

There are, of course, some atypical artist residency programs that eschew the traditional format. San Antonio's Artpace, for example, enlists curators to conduct studio visits and select three artists — one local artist chosen from the visits, together with a national and international artist of the invited curator's choice. With substantial funding, each artist creates new work in the space, which shifts from being a studio to becoming an exhibition space at the end of each cycle.

At the Torrance Art Museum in Southern California [through June 30th—Ed.], Director/Curator Max Presneill implemented the second installment of a unique artist residency program that functions simultaneously as a residency, an open studio event, and a museum experience. For "Studio System II," Presneill selected thirteen artists from a field of eighty applicants and assigned each a section of the main gallery to set up shop for the duration of the exhibition cycle. Unlike most residencies, where studios can be semi-private, "Studio System II" was structured like an art fair, with tiny spaces clustered close together, so privacy and solitude are unattainable. The program is effectively urbanization of an artist residency.

As an interactive exhibition, "Studio System II" offered an innovative immersive experience that exposed viewers to the creative process, not only as witnesses, but also as participants. In addition to meeting and conversing with the artist residents about their works-in-progress, visitors could engage in some of the art making. They could model for Jodi Bonassi, for example, as she sketched their faces into sections of new fantasy paintings. Options for children included helping Lawrence Gipe fill in sections of his 15-foot drawing "All the Missiles of 1959," while adults were invited to sip tea and chat with Feng Ling (Carmen Zou) before joining the artist in pouring droplets of tea onto the surface of a horizontal scroll that is essentially a ritualistically performed collaborative painting.

In addition to providing viewers with experiences not commonly found in museums, "Studio System II" presented a diverse group of artists, ranging from emerging to established, from local to international, and whose art traverses a wide spectrum of mediums. This eclectic mix also introduced some remarkable talent. Younger artists to keep an eye on include Khang Bao Nguyen, a PhD candidate in the Department of Religion at Claremont Graduate University. Nguyen's painted geometries function as contemporary mandalas that explore concepts of unity and balance. Anna Garner spent her time in Torrance photographing and lifting up male bodybuilders as a means of understanding the differences and similarities between female and male stereotypes.

The most impactful project at "Studio System II" was Chinese artist Huo You Feng's "Refuge," which served as a cathartic vehicle for contrasting the human need for protection with the tendency of authoritarian regimes to separate people by building nationalistic walls. Sharing an affinity with his fellow countryman Ai Weiwei, Huo embraces the metaphoric potential of his materials, forms and actions for articulating about social injustice. Using bales of hay as his medium, Huo modified his installation throughout the course of the residency, alternately constructing shelters and walls. While reshaping his structures, he acted out his emotional responses to the concept of barriers by physically pounding the bales of hay. Given the current situation of our nation and the world, Huo's activities and structures could not be more relevant.