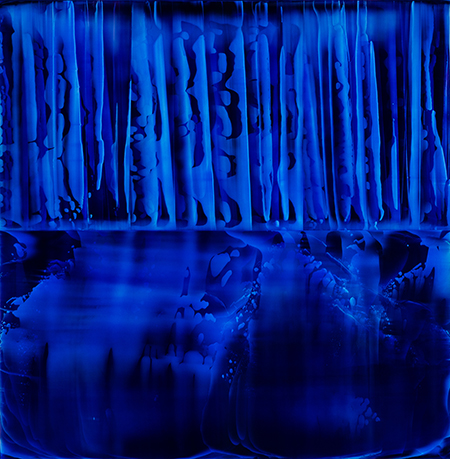 James Lumsden impresses with a body of work that pushes the boundaries of painting itself. These abstract canvases in acrylic, executed between 2013-2017, represent a bold and adept vision whose sense of color and form are mature, captivating and full of feeling. Lumsden lives and works in Scotland and has exhibited internationally throughout North America and Europe. The paintings here range from small to medium in scale and are realized through an ordered aesthetic process wherein dozens of crystalline films of gloss medium and pigment are layered, pulled, and arranged over the surface.

A number of the pieces are bisected by pictorial elements that meet on the surface, creating a dividing line of incompatible shapes. This is clearly seen in “Reflex (8/14),” in which vertically oriented forms, bathed in green and purple, line up in a row fill the upper half of the canvas. They run into larger volumes of the same hues that occupy the lower half and which, unlike the elements above, look like biological forms. This interaction takes place several times throughout the show. In other pieces drawn from the “Reflex” series there is a collision of pigmented fields of light that bend and refract upon contact. From the accompanying “Echoes” series, “Echoes (1/13)” is a striking image of dangling red forms floating over a white band placed at the lower end of the canvas. This deep white section has a glacial feeling about it, like frozen clouds of mist just detached from an iceberg. Given the formal strengths of this work, Lumsden also manages to evoke both fantastic and haunting emotions.